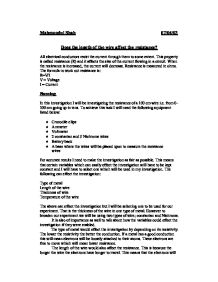 Does the length of the wire affect the resistance?

Does the length of the wire affect the resistance?

In this investigation I will be investigating the resistance of a 100 cm wire i.e. from 0-100 cm going up in tens. To achieve this task I will need the following equipment listed below:

Length of the wire

Temperature of the wire

The above can effect the investigation but I will be selecting one to be used for our experiment. That is the thickness of the wire in one type of metal. However to broaden our experiment we will be using two types of wire; constantan and Nichrome.

This defines resistance. For Ohmic conductors the resistance is constant and Ohms law of proportionality holds. This means that after I have done my investigation I should get graphs which are proportional (Y = X) i.e. as the length increases, resistance increases.

To start this experiment I first collected the correct equipment. The equipment that I used is as following:

After collecting the equipment we then set up the experiment. Below is the diagram which shows how the investigation looked like: 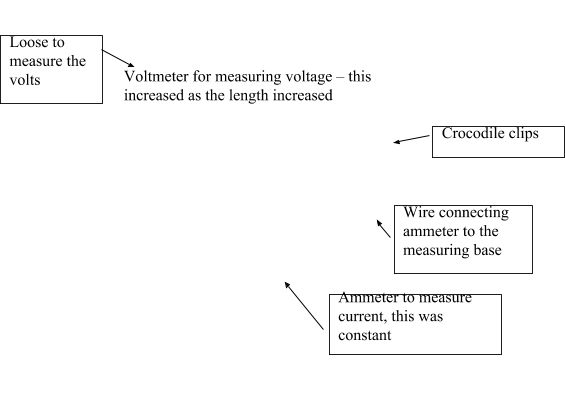 This diagram can be drawn simply as the following: 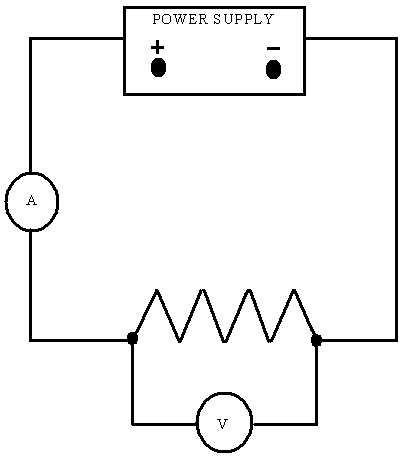 During the investigation we kept all the variables constant except for one, the thickness. I used in total five thickness of five wires where two wires were constantan (0.18 mm and 0.30 mm) and nichrome (0.46 mm, 0.55 mm and 0.69 mm diameter). In the thickness of wires I did see a significant difference. As the thickness increased of both wires the resistance decreased. This is because the thicker the wire more the (current) electrons have a wider space to travel so they will collide less often with the atoms with the wire like it would do in a thin wire.

In total we took five measurements of the five wires.

If I was to do the experiment again I would firstly use a power supply instead of a battery pack. This is because with a power supply you are getting an accurate amount of electricity supply rather than a battery pack because when I increased the length the voltage increased meaning power of the batter reducing. Instead of using two types of metals I could have used 4 types of metals meaning a better comparison between the four rather than two. We could use the type of metal as a selected variable to see how the resistance occurs over that. If I was to redo the experiment then I would use a straight wire rather then a bendy wire. This is because in our experiment the wires that were being tested were not exactly straight rather bendy which could be clearly seen. Next time I would use a straight wire which would enable a straight flow of current rather then a bended wire where resistance is higher.   Generally I know that this experiment was very good as my results show this.