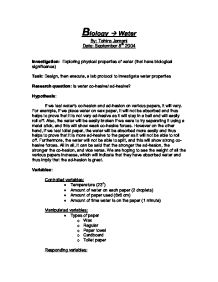 Exploring physical properties of water (that have biological significance).

Biology --> Water By: Tahira Jamani Date: September 8th 2004 Investigation: Exploring physical properties of water (that have biological significance) Task: Design, then execute, a lab protocol to investigate water properties Research question: Is water co-hesive/ ad-hesive? Hypothesis: If we test water's co-hesion and ad-hesion on various papers, it will vary. For example, if we place water on wax paper, it will not be absorbed and thus helps to prove that it is not very ad-hesive as it will stay in a ball and will easily roll off. Also, the water will be easily broken if we were to try separating it using a metal stick, and this will show weak co-hesive forces. However on the other hand, if we test toilet paper, the water will be absorbed more easily and thus helps to prove that it is more ad-hesive to the paper as it will not be able to roll off. ...read more.

Evaluation: We did have to re-do our lab after we tested 2 pieces of paper as we decided it would be better to keep the paper on the scale as we put the water on it so we can get an instant reading of the weight after 1 minute had passed. Some limitations that we discussed would be to maybe test a few more different papers such as wrapping paper, crepe paper and construction paper. Also we could have done the test two or three times to get more of a constant reading. A point of error that we found would after the paper towel or toilet paper as the water could still have been on the scale when we put the next piece on even though we wiped it down fast, we could have spent more time as it could have affected the weight. ...read more.