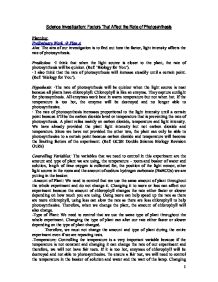 Factors That Affect the Rate of Photosynthesis

Changing the type of plant can alter our rate either faster or slower depending on the type of plant changed. Therefore, we must not change the amount and type of plant during the entire experiment even if we are repeating tests. -Temperature: Controlling the temperature is a very important variable because if the temperature is not constant and changing it can change the rate of our experiment and therefore, we will not have fair tests. If it is too hot, enzymes of chlorophyll will denature and not able to photosynthesize. We will need to control the temperature in the beaker of solution and water and the watt of the lamp. We mustn't change the watt. Changing the watt can vary the temperature, therefore a result of inaccuracy. -Length of time oxygen is collected for: The time must be controlled so that the rate of photosynthesis will not be changed. If we changed the length of time often (exm: 2min to 5min to 1min), we would not be able to find out the rate since it is being varied often. -Position of light censor: This is also an important variable because the different positions of the censor can give us different intensity, the closer it is the higher, the further away, the lower, therefore, the position must not be changed throughout the whole experiment. -Other light sources: For our experiment to be accurate and fair, we must not have other kind of light sources in the area we are working in. If there are, it may also help with the rate of photosynthesis by giving the plant more heat so it will photosynthesize more. -Amount of NaHCO?: The amount of NaHCO? can affect the rate greatly because the more of the solution you put in, the faster the rate will be. Therefore we must control and only give it a certain amount of NaHCO?. Experimental Variable(s): The variable that we will vary is the distance of the lamp. ...read more.

There were few anomalies (see graphs for marked anomalies) that did not fit the general pattern. I don't think that the results are good enough to draw firm conclusions because the pattern on the graph should be more on a curve. The line may not be as curved because it may be the possibility that the light censor had been slightly moved. Therefore, this problem can result to one of our improvements as stated above (having the light censor being taped to the beaker). �Further Work and Investigation: Further investigations can be varying other factors of the rate of photosynthesis, such as both light intensity and light quality at the same time or the amount of carbon dioxide (in this case, it is NaHCO?) being put into the beaker. �For light quality and light intensity, we can investigate this by repeating the method above then change the colour of panel being put in front of the light. Therefore, our experiment would be exactly the same as the one we did with the clear panel but instead of stopping afterwards, we start again but with a different colour panel (exm: red). After doing a few colours, we are able to find out which type of light is most used in photosynthesis. �We can investigate the amount of carbon dioxide by varying the amount of carbon dioxide being put in instead of the distance of lamp. For example, for starters we keep a distance of 5cm and start with 25mL of NaHCO? and 475mL of water and then test rate of photosynthesis. After repeating at least three times, we can a new solution to 50mL of NaHCO? and 450mL of water, but we continue to have a distance of 5cm. We test the rate of photosynthesis again. Then after, we continue this experiment until we have reached a desired measurement. Varying the amount of carbon dioxide can help us find out how much it speeds up the experiment and how much is needed for best results. ?? ?? ?? ?? 1 ...read more.

This is a substantial piece of work which reports on an investigation into the effect of light intensity on the rate of photosynthesis. The writer covers almost all of the key sections expected in a piece of GCSE practical science coursework. A preliminary experiment was carried out and the data from this was used to modify the actual method used. This is good practice and something not always seen in school science.

The report suffers from a number of weaknesses, however, which would prevent it from achieving the higher grades at GCSE. These are as follows:

[1] The report lacks a coherent introduction, setting out the biology behind the investigation. Instead, the writer launches into some rather vague predictions and a hypothesis which does not link the IV and DV, i.e. it is not testable.

[3] The sections following the preliminary experiment are mere repetitions of the earlier sections and have not been modified in the light of the preliminary data. this makes the report rather cumbersome to read.

[4] The data, which is itself very useful, is not properly analysed in any detail. A clear trend is visible but this is ignored in favour of theory taken from textbooks. This is a pity because the writer has carried out some good laboratory science and collected useful data.

Overall, this is a substantial piece of work involving considerable effort. With a better understanding of the process of photosynthesis and limiting factors, it would be a 4 star essay.