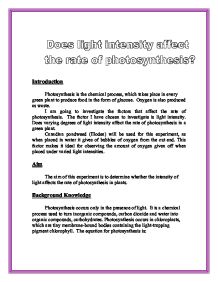 Investigate the factors that affect the rate of photosynthesis.

Varying the distance the lamp is from the beaker changes the light intensity, this happens because, the further a beam of light travels, the wider the beam becomes, when the beam hits a surface the light is spread over the surface, but if the surface was closer the beam would not be as wide and therefore more intense. Next I cut the bottom of the stem of the Elodea and placed in to the water upside down. I left the Elodea for one minute before I started to time the amount of oxygen bubble in the three minutes. I did this because as I am using the same piece of Elodea for each experiment, therefore I can make sure that photosynthesis was not taking place. After the one minute, I started the stopwatch and counted the amount of oxygen bubbles released by the plant. I recorded my results on my result table. I then changed the water and repeated the experiment measuring the lamp 4cms away. Next I repeated the experiment with the lamp 6cms away, then 8cm away, and final 10cms away. When I looked at my results I notices an anomalous result for 6cms distance, therefore I repeated this distance. Results table Distance away from Elodea (cms) Frequency of oxygen bubbles (in 3 min period) ...read more.

The retest experiment produced 39 oxygen bubble following the pattern that I predicted, and the pattern other experiments. The anomalous result has been added in my graph. If I were to do this experiment again I would change my method using a measuring cylinder as described above. My experiment is more than adequate to use in schools, with limited equipment. But the amount of errors in my method was not reliable enough for top scientist to use. This is because of the high level of errors which where beyond my control. A top scientist would have the equipment need to produce an experiment to the highest degree of accuracy. To extend this investigation further I would change the variables for example the type of plant I was using. I would try different types of plant and see if the results are similar for each type of plant. Also I could investigate the rate of photosynthesis when I changed the in take of Carbon dioxide or change the temperature. If I was to change the variable of my experiment. Eg. Temperature. I would still more or less follow my method, only using a hot water bath and a thermometer to record the temperature and the number of oxygen bubbles produced. I would record the number of oxygen bubbles given off at 20oC, 30oC, 40oC, 50Oc and 60oC. If I decide to investigate this variable I predict that as the temperature increased the cells would be killed therefore decreasing the rate of photosynthesis. ...read more.