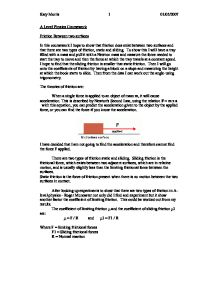 In this coursework I hope to show that friction does exist between two surfaces and that there are two types of friction, static and sliding.  To show this I will have a tray filled with a mass and pull it with a Newton mass and measure the force needed to start the tray to move and then the force at which the tray travels at a constant speed.  I hope to find that the sliding friction is smaller that static friction.  Then I will go onto the coefficients of friction by having a block on a slope and measuring the height at which the book starts to slide.  Then from the data I can work out the angle-using trigonometry.

The theories of friction are:

When a single force is applied to an object of mass m, it will cause acceleration. This is described by Newton's Second Law, using the relation F = m x a   with this equation, you can predict the acceleration given to the object by the applied force, or you can find the force if you know the acceleration.

I have decided that I am not going to find the acceleration and therefore cannot find the force F applied.

There are two types of friction static and sliding.  Sliding friction is

Note the height and replete readings

The only safety issue I must take note of is the fact that the block could hit someone when I comes off the ramp to over come this I will do my experiment away from people and also have a tray to catch the block.

I hope to find that different weight and different size block have different frictions and will slide down the ramp at different angles.

My first set of results is:

Note the length of the plank is 89.5cm

There are a few anomalies in my results like B’s second result, which is totally out on all my other results.

This could be down to the board sliding.  In my experiment I never kept an eye on if the board was sliding.  I am going to repeat the experiment but on the desk I am going to place a piece of tape to mark out the point at which the board should be.  Also I must make sure that the blocks must go straight down the plank so that the surface is the same.

The few anomalies, which occurred during my experiment, could be down to a few factors:

To stop these from occurring I could have made a better ramp system rather than me lifting the ramp I could have had a mechanism doing if for me.  The factor that the block might have took a different route down the slope I can really over come other than to repeat the results and take an average to take out any anomalies that may have occurred.  As I took 6 readings with each block I think that any anomalies that may have occurred will have been cancelled out.

This book was useful to me as it had a few pages on the different types of friction and also showed a experiment to show the coefficient of friction and how to calculate this.

This website provided me with some simple notes on the different aspects of friction noting to complex.

This website was off a lesson which a school had taught there was only a small section on friction.

This is a good attempt at a report. However, the practical does not accomplish its aims and the report lacks structure.
1. The introduction is well researched and written.
2. The use of diagrams is good.
3. The tables are well presented.
4. There are lots of subheadings missing that would give the report structure.
5. The practical itself does not include independent and dependent variable.
6. There is no analysis of the results.
*** (3 stars)