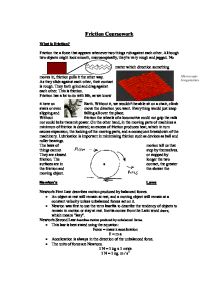 Friction Coursework What is Friction? Friction the a force that appears whenever two things rub against each other. Although two objects might look smooth, microscopically, they're very rough and jagged. No matter which direction something moves in, friction pulls it the other way. As they slide against each other, their contact is rough. They both grind and drag against each other. This is friction. Friction has a lot to do with life, as we know it here on Earth. Without it, we wouldn't be able sit on a chair, climb stairs or even move the direction you want. Everything would just keep slipping and falling all over the place. Without friction the wheels of a locomotive could not grip the rails nor could belts transmit power. On the other hand, in the moving parts of machines a minimum of friction is desired; an excess of friction produces heat, which in turn causes expansion, the locking of the moving parts, and a consequent breakdown of the machinery. ...read more.

* The units of force are Newtons. 1 N = 1 kg x 1 m/s/s 1 N = 1 kg. m / s2 Factors Affecting Friction Friction depends partly on the smoothness of the contacting surfaces, a greater force being needed to move two surfaces past one another if they are rough than if they are smooth. However, friction decreases with smoothness only to a degree; friction actually increases between two extremely smooth surfaces because of increased attractive electrostatic forces between their atoms. Lubrication makes the irregularities smooth by making another surface from a liquid or gas for the two surfaces to meet. Friction does not depend on the amount of surface area in contact between the moving bodies or (within certain limits) on the relative speed of the bodies. It does, however, depend on the magnitude of the forces holding the bodies together. ...read more.