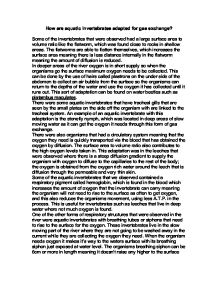 How are aquatic invertebrates adapted for gas exchange?

How are aquatic invertebrates adapted for gas exchange? Some of the invertebrates that were observed had a large surface area to volume ratio like the flatworm, which was found close to rocks in shallow areas. The flatworms are able to flatten themselves, which increases the surface area meaning there is less distance internally in the flatworm meaning the amount of diffusion is reduced. In deeper areas of the river oxygen is in short supply so when the organisms go the surface maximum oxygen needs to be collected. This can be done by the use of hairs called plastrons on the under side of the abdomen to collect an air bubble from the surface so the organisms can return to the depths of the water and use the oxygen it has collected until it runs out. This sort of adaptation can be found on water beetles such as platambus maculates. There were some aquatic invertebrates that have tracheal gills that are seen by the small plates on the side off the organism with are linked to the tracheal system. ...read more.

in the process. This is useful for invertebrates such as leeches that live in deep water where not much oxygen is found. One of the other forms of respiratory structures that were observed in the river were aquatic invertebrates with breathing tubes or siphons that need to rise to the surface for the oxygen. These invertebrates live in the slow moving part of the river where they are not going to be washed away in the current while they are collecting the oxygen they need. When the organism needs oxygen it makes it's way to the waters surface with its breathing siphon just exposed at water level. The organisms breathing siphon can be 6cm or more in length meaning it doesn't raise any higher to the surface then it has to. In some cases the end of the siphon exposed to the atmosphere is covered with dense, tiny hairs, which stop water from getting into the siphon. ...read more.

There bodies are flattened each side so they travel though the water in a streamline way to reach the top as quick as possible. An aquatic invertebrate with these adaptations that was found in the river was a freshwater shrimp or gammarus, Freshwater limpets were found in the fastest moving water in the river as these organisms can cling to the rocks and never have to move meaning they need very little oxygen at all. The adaptations that are found on these aquatic invertebrates are all different to each other as it depends on where the organism is located in the river, the shallow areas, deep areas, or the riverbed. Invertebrates that live in shallow water areas are adapted to intake the oxygen they need for a short period of time and organism that live in deeper water need as much oxygen as they can obtain. The aquatic invertebrates that live in the deepest areas of the river are the most adapted out of all the organisms observed as these need to diffuse the oxygen from the water itself. ...read more.

This essay takes a brief look at the various adaptations that exist in aquatic invertebrates which enable them to obtain oxygen from their environment. It is largely based on observations made by the student of stream invertebrates and these first-hand observations lend the essay added interest.

However, the essay suffers from a lack of detail and leaves the reader asking a lot of questions. Species names are frequently omitted and the design features of each adaptation are omitted from the discussion. In what way is the skin of a leech ideally suited to gas exchange? How are tracheal gills designed to exchange gases efficiently? Where does the syphon on a drone fly larva actually deliver the oxygen to? And are the lungs of snails like our own? Adaptation is inextricably linked to design, and without describing the design of structures, it is difficult to understand how they adapt the organism to a particular habitat.

Finally, both an introduction and summary are needed to give the essay some shape.