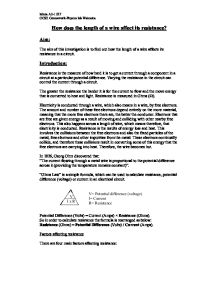 How does the length of a wire affect its resistance

How does the length of a wire affect its resistance?

The aim of this investigation is to find out how the length of a wire affects its resistance in a circuit.

The greater the resistance the harder it is for the current to flow and the move energy that is converted to heat and light. Resistance is measured in Ohms (Ω).

To make and investigate the resistance further, I should have used different wires and tested them fully. Whereas in the preliminary I took only one reading of three different wires, as do that I could familiarise myself with the investigation.

I could have also, to make the investigation more accurate by measuring the temperature of the wire to find out whether different lengths of wires have different temperatures so as this may affect the resistance