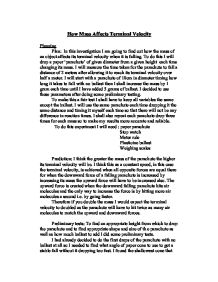 Plan:  In this investigation I am going to find out how the mass of an object affects its terminal velocity when it is falling. To do this I will drop a paper ‘parachute’ of given diameter from a given height each time changing its mass. I will measure the time taken for the parachute to fall a distance of 2 meters after allowing it to reach its terminal velocity over half a meter. I will start with a parachute of 10cm in diameter timing how long it takes to fall with no ballast then I shall increase the mass by 1 gram each time until I have added 5 grams of ballast. I decided to use these parameters after doing some preliminary testing.

To make this a fair test I shall have to keep all variables the same except the ballast. I will use the same parachute each time dropping it the

I then needed to find an appropriate size of parachute to use. I found that a bigger parachute would fall more slowly than a smaller one so I decided to use a parachute of 10cm in diameter as this is the biggest parachute you can get from a single sheet of A4 paper. I wanted a parachute that would fall as slowly as possible so that any human error that could be made with the timing would be minimized.

I also needed to find appropriate amounts of ballast to add to the parachute. I had already decided to use 5 different masses plus the un-ballasted parachute for my results so I needed a number that would easily divide by 5. I tested the parachute with ballasts increasing in half grams (0.5, 1, 1.5, 2, 2.5), ballast increasing in single grams (1, 2, 3, 4, 5) and ballasts increasing in 2 grams (2, 4, 6, 8, 10). I found that the ballasts up to 10 grams fell too quickly to time efficiently and that the ballasts up to 2.

Although my experiment produced the results I expected it was not perfect and there were some anomalies. For instance there was some variation in the three different times for the same mass, this was probably due to different reaction times whilst timing. If I were to do the experiment again I might use a pair of sensors set at the top and bottom of the parachute fall which could time more accurately.

Other anomalies could have occurred due to due to fluctuations in air pressure and temperature which in a laboratory situation could be controlled slightly more accurately. Also using a larger parachute over a longer distance would help the accuracy of the experiment as well as repeating the experiment a greater number of times with a greater number of different masses.