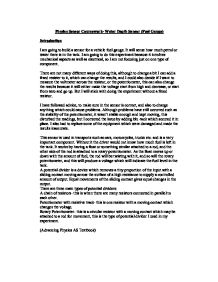 I am going to build a sensor for a vehicle fuel gauge. It will sense how much petrol or water there is in the tank.

I am going to build a sensor for a vehicle fuel gauge. It will sense how much petrol or water there is in the tank. I am going to do this experiment because it involves mechanical aspects as well as electrical, so I am not focusing just on one type of component.

There are not many different ways of doing this, although to change a bit I can add a fixed resister to it, which can change the results, and I could also decide if I want to measure the voltmeter across the resistor, or the potentiometer, this can also change the results because it will either make the voltage start from high and decrease, or start from zero and go up. But I will stick with doing the experiment without a fixed resistor.

I have followed advice, to make sure in the sensor is correct, and also to change anything which could cause problems. Although problems have still occurred such as the stability of the potentiometer, it wasn’t stable enough and kept moving, this disturbed the readings, but I corrected the issue by adding blu-tack which secured it in place.

After I have collected a full set of results, I shall turn the power pack off for a while to stop it from over-heating or overloading.

The trial experiment is to test out what measurements would be best to use, what voltage the power pack should be on, if it should be AC or DC etc.

Uncertainties may occur such as differences of readings, but these can be eliminated by repeating the experiment several times and taking the averages. This will make the results more reliable.

I have decided to use a DC current, as it will be more accurate, and the power pack will be set at 12 volts, because this gives a good set of results with the voltages being more spread out.

When I measured the power pack on its own in parallel to the voltmeter, it actually gave a reading of 12.25 volts.

Things which have affected my results were wrong levels of water in the beaker due to some left in from the previous reading, so I tried to make it as empty as possible.

I dealt with uncertainties, such as anomalies in the results, by eliminating them when calculating the average, this made it more accurate.

I also had to make sure that all the equipment was in good condition for the experiment to work properly, and I replaced the ones that weren’t. When I used the damaged equipment the voltmeter gave odd readings, so I knew something was wrong.

The resolution is the smallest change it can detect in the quantity it is measuring. The smallest change for my sensor which could be measured was 0.01 volts, and this was when the water depth came up to 660 ml.

As a result from my experiment, I have found my sensor to be very fit for its actual purpose, it can do what it’s meant to and can do so very accurately.