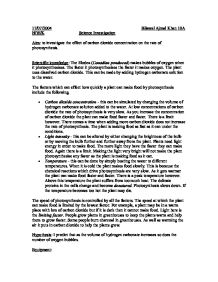 investigate the effect of carbon dioxide concentration on the rate of photosynthesis.

The results were also reliable because for each volume of hydrogen carbonate added, three different results were obtained and the average found. This was meant to reduce the level of errors. When the amount of hydrogen carbonate added was 10cm�, the amount of oxygen bubbles produced were 13.3. This is an anomalous result because it did not fit into the curve of best fit. This anomalous result could be due to inaccurate readings and measurements. If I was asked to carry out this experiment again, I would rinse my equipment thoroughly before re-using them and have my readings confirmed by someone else before recording them. I think that I have enough evidence to firmly support my evidence because I took several readings and then the graph I obtained is similar to those found in several science text books. To provide further evidence to support my conclusion I could set up a control test with no hydrogen carbonate added. The results obtained will be compared with the results obtained for the experiment in which hydrogen carbonate is added. I could also redo the whole experiment to see and compare the results I obtained if they are similar. ...read more.

****
A good account showing a clear understanding of concepts. A few minor errors.