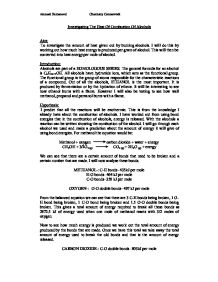 Investigating The Heat Of Combustion Of Alcohols.

Investigating The Heat Of Combustion Of Alcohols

To investigate the amount of heat given out by burning alcohols. I will do this by working out how much heat energy is produced per gram of alcohol. This will then be converted into heat energy per mole of alcohol.

Alcohols are part of a HOMOLOGOUS SERIES. The general formula for an alcohol is CnH2n+1OH. All alcohols have hydroxide ions, which acts as the functional group. The functional group is the group of atoms responsible for the characteristic reactions of a compound. Out of all the alcohols, ETHANOL is the most important. It is produced by fermentation or by the hydration of ethene. It will be interesting to see how ethanol burns with a flame. However I will also be testing to see how well methanol, propanol and pentanol burns with a flame.

We can see that there are a certain amount of bonds that need to be broken and a certain number that are made. I will now analyse these bonds.

oC. However all the other factors will be attempted to be controlled to the best of our abilities.

To make sure that the volume of water is constant throughout the experiment, we will accurately measure out 50mm of water in the measuring cylinder making sure the same person measures out the water each time.

This is difficult to control since the volume of alcohol in each spirit burner will decrease as the experiment goes on since other groups will be using the spirit burner. This means that the length of the wick may vary. This may cause anomalies in our experiment but hopefully we can still obtain as accurate results as possible.

BUILD UP OF SOOT-

If we had found out the heat capacity of the copper calorimeter, we could have used this value to work in the formula to find out the amount of heat absorbed by it. This value would have been part of the heat energy given of by the alcohol even though some of it would have been passed on to the water. If we had taken this into account, our results would have been a lot more closer  to out predicted values.

We could have also had an evaporation lid with a hole in it to allow the thermometer to go through it. This would have lowered heat escaping through convection or evaporation lid.

The experiment could have been repeated more times to ensure that we obtain a better average and thus we would obtain a smooth straight line.

We could have taken the experiment further in a variety of ways. Below I have listed a few ways: