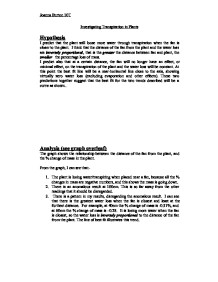 Investigating Transpiration in Plants Hypothesis I predict that the plant will loose more water through transpiration when the fan is closer to the plant. I think that the distance of the fan from the plant and the water loss are inversely proportional, that is the greater the distance between fan and plant, the smaller the percentage loss of mass. I predict also that at a certain distance, the fan will no longer have an effect, or minimal effect, on the transpiration of the plant and the water loss will be constant. At this point the best fit line will be a near-horizontal line close to the axis, showing virtually zero water loss (excluding evaporation and other effects). These two predictions together suggest that the best fit for the two trends described will be a curve as shown.. Analysis (see graph overleaf) The graph shows the relationship between the distance of the fan from the plant, and the % change of mass in the plant. From the graph, I can see that:- 1. The plant is losing water/transpiring when placed near a fan, because all the % changes in mass are negative numbers, and this shows the mass is going down. 2. There is an anomalous result at 100cm. ...read more.

My results do not show this. This could be because there are not enough results, or across a sufficient range to test this prediction. A way of carrying on the experiment to test the prediction would be to use a wider range of values for the distance of the fan from the plant. I think that if the experiment were to be carried on, there would eventually be a distance where the fan would have no or minimal effect on transpiration and the change in mass would be measured as constant. At this point the best fit line on the graph would level off, becoming the curve as described in my hypothesis. Evaluation Evidence Obtained: I think that the procedure to obtain my results was quite successful because I obtained a set of results that partially show a pattern that supports my prediction. Quality of Evidence: As previously mentioned, it would have been better if we had more results over an extended range. Anomalous Result : There is one anomalous result in my experiment. It is identified on my graph with a circle around it. It is the calculated average loss in mass where the fan is 100cm away from the plant. We can see from the graph that it doesn't follow the pattern at all. ...read more.

Both are equally effective. * When topping up the conical flask, measure it to the original mass instead of the original water line using the syringe. * Do not top up the liquid inside the flask after each measurement has been taken. Instead of using the original mass to calculate the percentage change in mass, use the last recorded mass. For human error that may have occurred during the experiment, double-checking, preferably with a partner, will reduce the likelihood of measurement and recording error. Further Work To Provide Additional Relevant Evidence: In addition to the above improvements, the main suggestion I would make to provide additional evidence for the effects of wind on transpiration would be to have more results over a wider range of distances. This would fully test my hypothesis about the steeply reducing effect of the fan at larger distances. I would recommend additional results taken at 140cm, 170cm, 200cm, 250cm, 300cm, and 400cm. If this does not show the flattening of the curve expected, the experiment could be repeated at longer distances. Another factor that would be interesting to investigate is the temperature effect on the rate of transpiration in the plant. To do this, I would repeat the above experiment at three different but constant temperatures. A room or cellar temperature could be controlled with the thermostat. Possible temperature range could be 5, 15 and 25 degrees Celsius. Joanna Burton 10T ...read more.