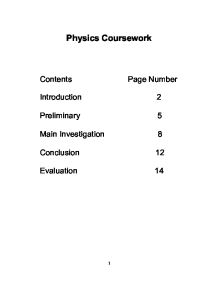 Resistance occurs in circuits because of components in the circuit and a larger amount of resistance causes the battery to have to exert more energy to push the charges through the circuit. This then causes the current to decrease as resistance is not allowing as much current to flow. Resistance can be useful in some circuits. Devices called resistors are used to control the flow of charged in a circuit. Variable resistors can be used to make varying the size of the current easier as the size of their resistance can be steadily changed using a dial or slider. Variable resistors are used in dimmer switches and volume controls like that of a CD player. Another type of resistor is an LDR, (Light dependent resistor) which is a variable resistor. This resistor's resistance increases, as light levels decrease as it gets darker and decreases, as light levels increase during daytime. This makes LDR useful for example in automatic security lights. One finally type of resistor is a thermistor, which has a higher resistance at low temperatures and a lower resistance at high temperatures. A thermistor can be used as a temperatures sensor in devices like fire alarms.

Changing the voltage, however will not affect the resistance of the wire. This 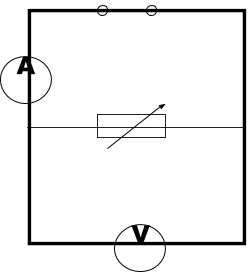 This is the method for my main investigation:

I decided to change my lengths from 20cm-100cm, to 10-100cm because it gave me a slightly wider range of data.  When I tried the length 10cm again, the current did not go above 1A; the earlier result had been caused by systematic errors in the equipment because of the preliminary being carried out over several days, so the equipment I used would have changed. However, I will collect all the results for my main investigation in one day so that my results will not be affected due to equipment changes.

The independent variable is the wire lengths and the dependent variable material and temperature of the wire. I cannot keep the temperature of the wire the same exactly because the wire heats up anyway as the current run through it, due to the electrons colliding against the metal. But I can be able to control it as much as I was able to by keeping the current below 1A and by turning off the power pack after testing each length.

I have also tested each length of the wire three times so that I have a fair test and my results are more reliable as I will be taking an average from them. After I recorded the results in tables, I then found figures for the average resistance, which will be used in a graph.

As mentioned in my method, I decided to measure the thickness of my wire at five points using a micrometer. The reason for doing this is so that I could see if the wire was of a uniform width throughout it and also calculate an average width.

These results show that the thickness of a wire varies throughout the length of it and the diameters aren’t always the same. My average diameter was 0.23mm, which however is not 0.25mm, the diameter of wire the manufacturer states. This may have an effect on the results I record for my investigation, because as I have stated before, diameter does have an effect on resistance, with a wider diameter reduced resistance due to there being more space for the electron to move around. Since my diameter is smaller than it should be, the resistance values I record may be higher than they should be.

Though I do not think my results were very accurate, they were very reliable and precise because of the reasons stated above.

I took readings from an ammeter and a voltmeter. I intended to wait for each reading to stop fluctuating so that my results could be made more accurate but I did not have enough time so I did not do that. This may have made my results more accurate as I might not have recorded the true values for current and voltage since I ended up recording the first number I saw. This could have lessened the credibility of my conclusion, if the values I ended up using were not correct then the theory of length being proportional to resistance that I sought to prove with my data may be wrong. This decreases my confidence with my conclusion, however because most of my data followed a clear trend and I was able to reach my conclusion using a variety of methods to check it, I cannot readily discount my the validity of my conclusion.

Another reason why I’m less confident with my conclusion than I should be is due to the ranges of lengths I have chosen. Though going up in tens is a reasonable amount, I feel that my results could have gotten a much better accuracy by using smaller lengths. For example, I could have gone up in fives instead and ended up using twenty lengths instead of ten. To improve my conclusion next time, I must first increase the precision of the way I collect my data so that my results will be more accurate. I would also have to research more into resistivity and resistance, so that I could better use science to evaluate my data and write a better conclusion.