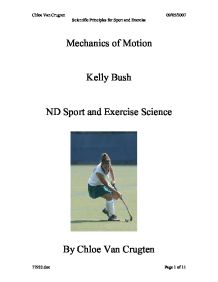 Scientific Principles for Sport and Exercise 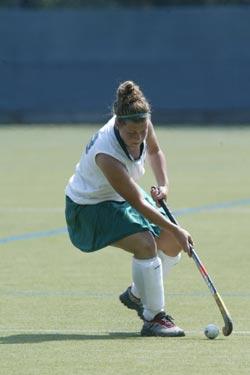 In this assignment I am going to undertake calculations involving speed, velocity and acceleration. I will recall Newton’s laws and describe the factors which affect stability. I will also try to apply Newton’s laws to simple movement. I will also explain how angular motion can be applied to sporting performance.

Newton’s first law of Motion also sometimes known as the Law of Inertia, states that an object at rest stays at rest unless acted upon by an unbalanced force, and an object in motion stays motion at the same speed and in the same direction unless acted upon by an unbalanced force. If all forces acting upon an object are equal it is said that the acceleration will be 0 and the object described as in a state of equilibrium. An example of this can be seen on a Hockey pitch, a ball sat on a flat Astroturf will not move, it is held in place by the gravitational pull of the earth. However when a player comes along and hits the ball, it is acted on by an unbalanced force (as Newton says). Which causes it to move, the ball will carry on moving until one or a mixture of opposing forces stops it. If the ball hits a stable object i.e.

This is the elapsed times for each 10 meter interval for Ben Johnson and Carl Lewis in the Men's 100 m Final at the 1988 Olympic Games in Seoul, Korea. I am going to use each of the final times and the distance (100m) to calculate an average velocity for both of them.

Acceleration is the change in velocity over a period of time, if velocity goes down it is called deceleration. When you start running you accelerate until you reach a constant rate. The equation for this is:

During Hockey the movement and motions are not always linear, in a straight line. They can be in curves like the swinging of a hockey stick in order to strike a ball. However it is possible to use the same principles and concepts to describe angular motion, or motion in a circle. When measuring angular motion it differs from linear motion because of the units involved. Linear motion uses meters per second (ms-1). In angular motion changes in position are measured in degrees (◦).

The position of the hockey stick at any given moment is its angular position; this is measured in relation to something else such as the ground or another object. When the stick swings the distance it travels is referred to as angular displacement. This is represented by the Greek letter theta (Ө). And the rate at which this happens is known as angular velocity. It is calculated by dividing angular displacement by time. This then means that the average angular velocity of a rotating stick is worked out by dividing the angular displacement by time taken to turn through this angle. The symbol for this is the Greek letter omega and is measured in ◦s-1.

In this assignment I have learnt all three of Newton’s laws of motion and applied them to simple sporting movement. I have undertaken calculations and talked about angular motion as well as linear motion.