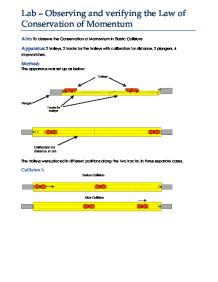 Observing The Law of Conservation of Momentum

Lab – Observing and verifying the Law of Conservation of Momentum

Aim: To observe the Conservation of Momentum in Elastic Collisions

Apparatus: 2 trolleys, 2 tracks for the trolleys with calibration for distance, 2 plungers, 4 stopwatches.

The apparatus was set up as below:

The trolleys were placed in different positions along the two tracks, in three separate cases. 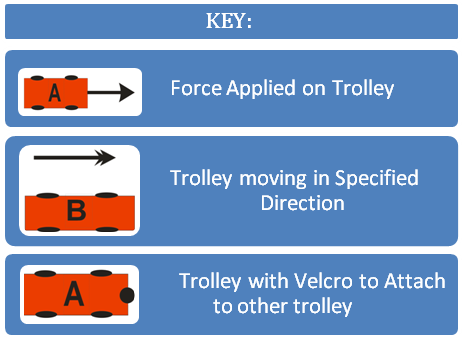 In the second collision, both the trolleys were propelled simultaneously towards each other from the ends of the two tracks.

This data was then processed using formulas for Velocity and momentum.

st Law, and hence the Law of Conservation of Momentum. Once this is done, the results would probably be more accurate.

The errors in the second case however, differ from the other 2, and from what errors one would normally accept, as the momentum increases after the collision. Normally, one would expect it to decrease due to friction, however, in this case it decreases, which indicates that there have been some random errors. The solution to this isn’t as easy or straightforward as the one to cases 1 & 3.

The results would have been more accurate, if we could have tried each collision more than 1 or 2 times, as we would have a more accurate sample. Also, we would be able to determine whether the errors were systematic or random. However, due to lack of time, we were only able to take one or two readings in each case.