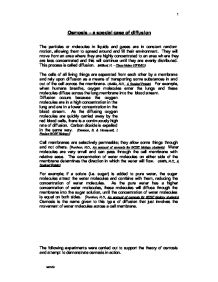 Osmosis - a special case of diffusion The particles or molecules in liquids and gases are in constant random motion, allowing them to spread around and fill their environment. They will move from an area where they are highly concentrated to an area where they are less concentrated and this will continue until they are evenly distributed. This process is called diffusion. (Mitford, H. - Class Notes 07/10/02) The cells of all living things are separated from each other by a membrane and rely upon diffusion as a means of transporting some substances in and out of the cell across the membrane. (Griffin, N.C., A Soaked Potato) For example, when humans breathe, oxygen molecules enter the lungs and these molecules diffuse across the lung membrane into the blood stream. Diffusion occurs because the oxygen molecules are in a high concentration in the lung and are in a lower concentration in the blood stream. As the diffusing oxygen molecules are quickly carried away by the red blood cells, there is a continuously high rate of diffusion. Carbon dioxide is expelled in the same way. (Dawson, B. & Honeysett, I. Revise GCSE Biology) Cell membranes are selectively permeable; they allow some things through and not others. (Purchon, N.D., An account of osmosis for GCSE biology students) Water molecules are very small and can pass through the cell membrane with relative ease. ...read more.

Method I filled three drinking glasses with approx. 100ml of pure water. I added four tablespoons of salt to the first glass, four tablespoons of sugar to the second glass, nothing else was added to the third. I then placed an equal size "chip" of potato, which had been measured, in each glass; the texture of the potato was crisp, firm and wet to the touch. The potato was then left for two days. Results Size of potato "chip" Before After Salt & water 32mmx14mm 26mmx11mm Sugar & water 32mmx14mm 27mmx11mm Pure water 32mmx14mm 33mmx16mm Discussion The potato I used for this experiment had been dug from my garden about two months ago and due to its age, probably had less water in it than a younger potato. The potato could also have had some substance, perhaps from the soil, dissolved in its water, which could have lowered it's water molecule concentration. This might explain why there was a slight uptake of water in the potato in pure water, when you could have expected the potato to stay the same size. The potato in the sugar and salt solutions gave the expected results. There would have been a very low concentration of water molecules in the solutions, which drew out the water in the potato reducing them substantially in size. ...read more.

Usually, the net movement of water molecules would be from the pure water to the contaminated water. However, this flow can be stopped and reversed by applying a pressure on the contaminated water side, which then allows for the flow of pure water molecules across the membrane away from the contamination or salt. This process is called reverse osmosis. (Lachish, U., Osmosis, Reverse Osmosis and Osmotic Pressure, what are they?) (Brains, M. How does reverse osmosis work to purify or filter water?) Another example of osmosis is in food preservation. Bacterial growth is prevented in foods which are packaged in salt or sugar. This is because these solutes draw the water out of the bacterial cells, which prevents their growth and therefore, preserves the food. (Diffusion, Osmosis and Cell Membranes, Dept. of Biochemistry, University of Arizona) A well-known product also uses the osmosis principal. Gore-Tex is a man-made thin porous membrane that is bonded to fabrics to make them waterproof but breathable. There are nine billion pores per square inch in the Gore-Tex membrane, which make it too small for even water molecules to cross it, therefore, keeping you dry. However, water vapour molecules are small enough to cross the membrane so, as you perspire, these molecules will move away from your body across the Gore-Tex membrane to where they are in a low concentration (outside your clothes). (Krash, P. Dead Runners Society) (Brains, M. ...read more.