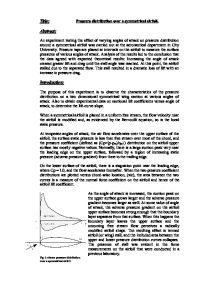 Pressure distribution over a symmetrical airfoil.

Title:Pressure distribution over a symmetrical airfoil.

An experiment testing the effect of varying angles of attack on pressure distribution around a symmetrical airfoil was carried out at the aeronautical department in City University. Pressure taps are placed at intervals on the airfoil to measure the surface pressures of various angles of attack. Analysis of the results led to the conclusion that the data agreed with expected theoretical results: Increasing the angle of attack created greater lift and drag until the stall angle was reached. At this point, the airfoil stalled due to the separated flow. This stall resulted in a dramatic loss of lift with an increase in pressure drag.

The purpose of this experiment is to observe the characteristics of the pressure distribution on a two dimensional symmetrical wing section at various angles of attack. Also to obtain experimental data on sectional lift coefficients verses angle of attack, to determine the lift-curve slope.

Measuring Devices to be used are Pressure Taps- The surface pressure distribution on an airfoil will be measured by means of 14 static pressure taps. These are small holes on the surface of the model that are connected to stainless steel tubes within the model and then to plastic tubing. The pressure taps on the airfoil are located on the upper and lower surfaces in the chord-wise direction at mid-span. The plastic tubing from these orifices is connected to separate monometers. 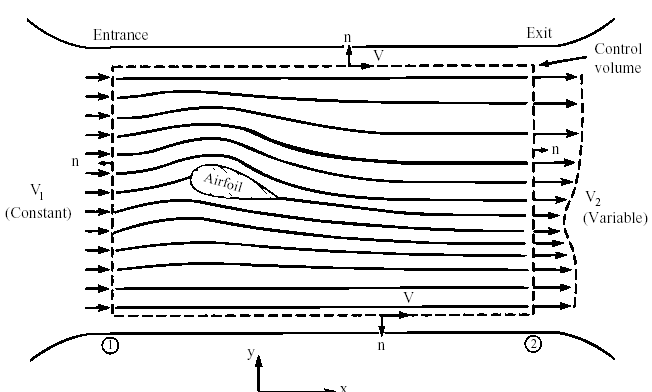 This diagram shows the Airflow around the airfoil in a wind tunnel.

It shows how the airflow is distorted around the airfoil.

The pressure coefficient is defined by:

V is the kinematics velocity and c is the length of the chord.

Where µ is the coefficient of viscosity and p is the density of the fluid.

For incompressible flow, and fixed wing geometry, we can see that for a fixed coefficient of lift CL, the lift is directly proportional to the square of the speed. This means that the faster the wing moves through the fluid, the more lift is generated. That is why an airplane has to pick up speed down the runway before it is able to takeoff. In order to takeoff, the wings (the entire vehicle) must produce more lift than the total gross weight of the aircraft (gross weight is the absolute total weight, i.e., including passengers, luggage, fuel, etc.). When the airplane is cruising at a constant altitude, the lift only has to balance, not exceed, the weight.

Where L is the lift, q∞is the dynamic pressure, and S is some reference area. Remember, dimensionless coefficients such as cl enable us to scale experimental results from sub–scale models to full–scale vehicles. Another thing to note is by writing Eq. (3) like,