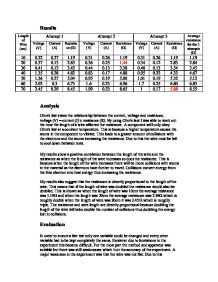 Resistance of wire. My results also suggest that the resistance is directly proportional to the length of the wire.

Ohm's law states the relationship between the current, voltage and resistance,

voltage (V) = current (I) x resistance (R). By using Ohm's law I was able to work out the how the length of a wire affected the resistance. A component will only obey Ohm's law at a constant temperature. This is because a higher temperature causes the atoms in the component to vibrate. This leads to a greater amount of collisions with the electrons and the atoms increasing the resistance. Due to this the wire must be left to cool down between tests.

In order to ensure a fair test only one variable could be changed and every other variable had to be kept completely the same. However due to limitations in the experiment this became difficult. For the most part the method and apparatus was suitable but there was still weaknesses which hurt the accuracy of the experiment. A major weakness in the experiment was that the wire was not flat. Due to this accurately measuring the length of the wire was very difficult. The wire may also have overheated on some attempts leading to a change in more than one variable as a higher temperature will lead to the atoms to vibrate causing more collisions in the wire. If I was to repeat this experiment I would use a fresh piece of wire so that I could more accurately measure the length of it I would also take more care to ensure that the wire cools down completely by waiting a longer time between tests.

My results had two outliers, attempt 2 of the 20cm wire and attempt 3 of the 70cm wire. I did not include these outliers in my average meaning that those averages are not as reliable as less numbers were used to work out the average. These outliers may have been caused by the wire overheating or by mismeasuring the length of the wire.

The error bars in my graph were mostly small and non-overlapping suggesting that my results were consistent and therefore reliable. An exception is the 40cm wire which had a considerably larger error bar. This suggests that the average for the 40cm wire is less reliable than the other averages.

Overall I am quite confident in my conclusion. My results showed that when the length of the wire increased so did the resistance which follows scientific theory. When collecting my data I was quite careful to ensure a certain level of accuracy by accurately measuring the wire and letting it cool down. The variation in my results were also relatively small. These factors all reinforce my confidence in my conclusion.

To further boost my confidence in my conclusion I could carry out the experiment with a greater range of lengths which would make my line of best fit more accurate, I could also carry out more repeats for each length as this would allow for a more accurate average thus leading to more reliable data.