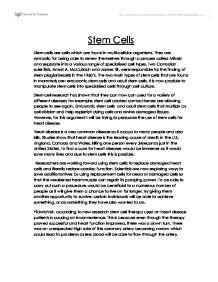 Stem cells and their application in cases of heart disease.

Stem cells are cells which are found in multi-cellular organisms. They are symbolic for being able to renew themselves through a process called Mitosis and separate into a various range of specialised cell types. Two Canadian scientists, Ernest A. McCulloch and James Till, were responsible for the finding of stem plagiarizecells in the 1960’s. The two main types of stem cells that are found in mammals are: embryonic stem cells and adult stem cells. It is now possible to manipulate stem cells into specialised cells through cell culture.

Stem cell research has shown that they can now can used for a variety of different diseases For example; stem cell coated contact lenses are allowing people to see again, Embryonic stem cells  and adult stem cells that multiply by cell division and help replenish dying cells and revive damaged tissues. However, for this argument I will be trying to persuade the use of stem cells for heart disease.

Heart disease is a very common disease as it occurs to many people and also kills. Studies show that heart disease is the leading cause of death in the U.S, England, Canada and Wales, killing one person every 34seconds just in the United States. To find a cure for heart diseases would be immense as it would save many lives and due to stem cells this is possible.

Researchers are working toward using stem cells to replace damaged heart cells and literally restore cardiac function. Scientists are now exploring ways to save additional lives by using replacement cells for dead or damaged cells so that the weakened heart muscle can regain its pumping power .To be able to carry out such a procedure would be beneficial to a numerous number of people as it will give them a chance to live on for longer. By giving them another opportunity to survive, certain individuals will be able to achieve something, or do something they have also wanted to do.

However, according to new research stem cell therapy used on heart disease patients is causing an inconvenience. This is because even though the therapy proved successful and heart function improved, there was a down turn. There was an unexpected high rate of the coronary artery becoming narrow which could lead to problems as less blood will be able to flow through the artery.

In conclusion, I believe that being able to carry out this procedure will be the right thing to do. Even though there is a chance of the coronary artery narrowing, under careful monitoring it will allow them to see if any unexpected effects turn up and solve them as son as possible.

The student has answered the question relatively well - they bring in the topic of stem cells before focusing in on their application in the treatment of heart disease. This narrows the answer's focus down well, but the supporting statement ...

The student has answered the question relatively well - they bring in the topic of stem cells before focusing in on their application in the treatment of heart disease. This narrows the answer's focus down well, but the supporting statement are relatively weak. They are not expanded upon enough or explored in much detail. Also, more points on both sides of the argument (for/against use of stem cells) should be put forward to bolster the argument.

As discussed above, the answer is evaluative, drawing a conclusion, with the candidate clearly giving their view as required for this type of question. However, the given examples, as mentioned above, should be more developed and brought back to the issue of heart disease treatment. The point about someone surviving to then go on and achieve something is good (GCSE looks for this drawing upon of other knowledge, not just scientific) but could be explored much more. Furthermore, sources of facts, such as heart disease killing someone every 34 seconds, should be cited to lend authority to the argument.

The writer has used terminology well to portray viewpoints. The answer is well crafted, in line with what is expected for this type of question at GCSE - it's overall structure follows this convention and works well.

Overall, the answer is well written, however the examples should be expanded upon to increase the quality of the answer.