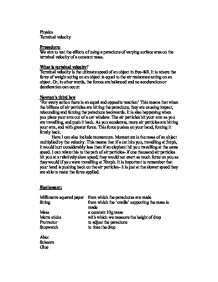 Test the effects of using a parachute of varying surface area on the terminal velocity of a constant mass.

Physics Terminal velocity Procedure: We aim to test the effects of using a parachute of varying surface area on the terminal velocity of a constant mass. What is terminal velocity? Terminal velocity is the ultimate speed of an object in free-fall. It is where the force of weight acting on an object is equal to the air resistance acting on an object. Or, in other words, the forces are balanced and no acceleration or deceleration can occur. Newton's third law 'For every action there is an equal and opposite reaction' This means that when the billions of air particles are hitting the parachute, they are causing impact, rebounding and forcing the parachute backwards. It is also happening when you place your arm out of a car window. The air particles hit your arm as you are travelling, and push it back. As you accelerate, more air particles are hitting your arm, and with greater force. This force pushes on your hand, forcing it firmly back. Here I can also include momentum. Momentum is the mass of an object multiplied by the velocity. ...read more.

We will be making the parachutes using the following method: Use compasses to prepare a set of diameter lengths. This will be the distance directly across the middle for each parachute. Then, halve it. This will find the radius. Using these collected radii, I will substitute them into the equation '? R2'. This will give me the surface area of my circular parachute. To help the parachute fall in a straight path towards the ground, I must construct a vent to deflect the air pushing up on it, rather than it simply being deflected. This vent will also be circular, so the same formula '?R2' will have to be used in determining the area of the gap. This will then be subtracted from the total surface area. After that, to make the parachute conical and therefore more parachute-like, I will measure around the parachute 45? and then multiply the total surface area by 7/8 as 45? is one- eighth of 360?. Fig. 1. ...read more.