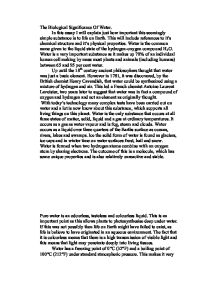 The Biological Significance Of Water.

The Biological Significance Of Water. In this essay I will explain just how important this seemingly simple substance is to life on Earth. This will include references to it's chemical structure and it's physical properties. Water is the common name given to the liquid state of the hydrogen-oxygen compound H2O. Water is a very important substance as it makes up 70% of an individual human cell making by mass most plants and animals (including humans) between 65 and 95 per cent water. Up until the 18th century ancient philosophers thought that water was just a basic element. However in 1781, it was discovered, by the British chemist Henry Cavendish, that water could be synthesized using a mixture of hydrogen and air. This led a French chemist Antoine Laurent Lavoisier, two years later to suggest that water was in fact a compound of oxygen and hydrogen and not an element as originally thought. With today's technology many complex tests have been carried out on water and a lot is now know about this substance, which supports all living things on this planet. Water is the only substance that occurs at all three states of matter, solid, liquid and a gas at ordinary temperatures. It occurs as a gas as water vapour and is fog, steam and clouds. ...read more.

Although water is electrically neutral the negatively charged electrons are drawn away from the positively charged hydrogen nucleus by the hydrogen-oxygen bonds from the oxygen nucleus. This means because of the angle size there is a net charge of positive on the hydrogen atoms and a net charge of negative on the oxygen atom. This is why a water molecule is called a polar molecule because it has an unequal distribution of electrical charge. Weak hydrogen bonds are formed as a result of this charge separation with other water molecules. Hydrogen bonds are also formed with any charged particles dissolved in water, and with charged surfaces. This gives it some unusual properties. Waters achieves its maximum density (when it's molecules are most densely packed) at the temperature 4?C (39?F) when it is still a liquid. Due to the more open arrangement of the water molecules in the ice lattice it expands upon freezing. This is unusual as most liquids contact when they cool and so reach their maximum density at their freezing point. So when water freezes the ice is less dense than the water and so it floats on the surface. This prevents the bulk of the water (sea, pond or lake) freezing as the ice on the surface insulates the water below it. ...read more.

A great deal of heat energy is required to raise the temperature of water and this is because water has a very high heat capacity higher than any other know substance. This is because a lot of energy is needed to break the hydrogen bond, which hold the molecules together. This means that water takes a relatively slow time to heat up and cool down. This is significant as aquatic environment are slow to change temperature giving the living organisms a chance to adapt. Also bulky organisms have a stable temperature even when the external temperature changes. The evaporation of water needs a lot of heat resulting in evaporation of sweat from the skin or transpiration from leaves cooling having a cooling effect. I conclude that although water seems like a very simple substance it has some amazing and unique properties and while researching this topic I found that right down to the atoms it's made up of and the bonds that hold it together water is in fact a very complex substance. This is the reason why it is the substance that all life on Earth depends on, whether it is a tall tree taking advantage of the fact that water has high tensile strength so it can draw water up though the xylem or the fact that water can pass though narrow cell walls so osmosis can occur. I think that many people take this remarkable substance for granted. ...read more.