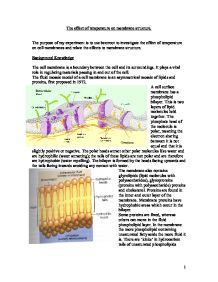 The effect of temperature on membrane structure

The effect of temperature on membrane structure. The purpose of my experiment is to use beetroot to investigate the effect of temperature on cell membranes and relate the effects to membrane structure. Background Knowledge The cell membrane is a boundary between the cell and its surroundings. It plays a vital role in regulating materials passing in and out of the cell. The fluid mosaic model of a cell membrane is an asymmetrical mosaic of lipids and proteins, first proposed in 1972. A cell surface membrane has a phospholipid bilayer. This is two layers of lipid molecules held together. The phosphate head of the molecule is polar, meaning the electron sharing between it is not equal and that it is slightly positive or negative. The polar heads attract other polar molecules like water and are hydrophilic (water attracting); the tails of these lipids are non polar and are therefore are hydrophobic (water repelling). The bilayer is formed by the heads facing upwards and the tails facing inwards avoiding any contact with water. The membrane also contains glycolipids (lipid molecules with polysaccharides), glycoproteins (proteins with polysaccharide) proteins and cholesterol. Proteins are found in the inner and outer layer of the membrane. Membrane proteins have hydrophobic areas which occur in the bilayer. Some proteins are fixed, whereas others can move in the fluid phospholipid layer. ...read more.

The following day I will place a beetroot section into each of the boiling tubes each containing 5 cm3 of distilled water and place them in water baths at 0�, 10�, 20�, 40�, 60� and 70�. After leaving the boiling tubes in the water baths for 25 minutes the slice will be removed and the boiling tubes shaken. Afterwards setting up a colorimeter I will set it to % absorbency. I will use a pipette to measure 2cm3 of distilled water into a cuvette and making sure it is placed in with the clear sides correctly I will set it to 0 for clear water. I will then do the same for each dye solution and test the absorbency at each temperature. A colorimeter will measure the percentage of light transmission through a solution. This is compared to a cuvette of distilled water, which is the clearest solution. Variables The independent variable is the factor that affects the dependent variable, any other variable that may affect the dependent variable must be kept constant. The independent variable in my experiment will be the temperature and the dependent variable will be the extent of colour change. I will control the size of the beetroot piece and also keep the amount of water they are in constant (5cm3). ...read more.

An increase in temperature denatured channel proteins. To improve the reliability of my results I would repeat my experiment more times to get a more accurate average. I noticed that the most accurate result I got was for the water bath at 70� which I think is because the water bath at 70� had a lid on it, keeping the temperature constant for the whole 25 minutes. If I was to repeat my experiment I would ensure all the water baths had lids. My points are not all on the line of best fit the most obvious anomaly being 60� , this may be due to experimental errors such as the temperature in the water baths, measuring using beakers and measuring cylinders. When cutting the beetroot there could have been an uneven distribution of dye and I could have cut through membranes causing further inaccuracy and anomalies. Some piece may have also contained more membrane that others. There also may have been a lot of inaccuracy when the boiling tube was placed in ice. This is because the ice is constantly melting meaning it is not always at 0�. If I repeated the experiment I would use a freezer so the temperature remained more constant. Conclusion I conclude that temperature does affect membrane structure. When the membrane is heated its structure begins to fall apart and the cells are denatured, therefore the colour is darker. ?? ?? ?? ?? 1 ...read more.