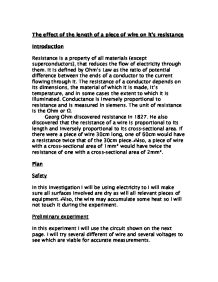 The effect of the length of a piece of wire on it&amp;#146;s resistance

The effect of the length of a piece of wire on it's resistance Introduction Resistance is a property of all materials (except superconductors), that reduces the flow of electricity through them. It is defined by Ohm's Law as the ratio of potential difference between the ends of a conductor to the current flowing through it. The resistance of a conductor depends on its dimensions, the material of which it is made, it's temperature, and in some cases the extent to which it is illuminated. Conductance is inversely proportional to resistance and is measured in siemens. The unit of resistance is the Ohm or ?. Georg Ohm discovered resistance in 1827. He also discovered that the resistance of a wire is proportional to its length and inversely proportional to its cross-sectional area. If there were a piece of wire 30cm long, one of 60cm would have a resistance twice that of the 30cm piece. ...read more.

Equipment Wires, power pack, 1m of ni-chrome wire, voltmeter and an ammeter. Method Set up equipment as shown in the diagram for the preliminary experiment. I am using this set up because it is viable to record all the needed values. Test the wire with the power pack set to 4 volts. Record the voltage and current each time. I will do two experiments and then find an average so as to attain a more general set of results. Prediction I predict that the resistance will be directly proportional to the length of the wire, i.e. if the wire is 30cm long the resistance will be half that of one 60cm long. This is because all the electrons will have to squeeze through a smaller gap for a longer time in the longer wire, thus slowing it down for a longer time. Results Final Results Experiment #1 Length (cm) ...read more.

This is because it takes the electrons longer to get through a long tight space than a small one, thus increasing the resistance. Evaluation There was only on notable anomalous result, the one for 20cm and 10cm in the second experiment. This is also reflected in the average results, but not to such a great extent. The measurements were as accurate as possible with the tools provided, and I used spreadsheets and computers to do the calculations, allowing a greater deal of accuracy. I think that given more time we could further improve the procedure by perhaps constructing a method of keeping the wire cool. This is because resistance will increase at high temperatures. Also, the accuracy of the measurements could be improved by using a data logger, but there was not on available. As a further investigation I could enquire as to how heat, thickness and light affect resistance. The results were sufficient to support a firm conclusion, as can be seen on the graph. The lines all follow the same trend and are very close. By Andrew Goodbourn 10O ...read more.