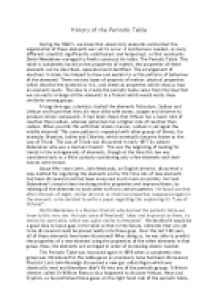 The History of the Periodic Table

﻿History of the Periodic Table During the 1860?s, we knew that about sixty elements existed but the organisation of these elements was yet to occur. A method was needed, so many different scientists significantly contributed, and helped out, so that eventually Dmitri Mendeleev managed to finally construct his table: The Periodic Table. This table is completely based on the properties of matter; the properties of these elements can be described, separated and identified. The arrangement of electrons in atoms has helped to show and explain to us the patterns of behaviour of the elements! There are two types of property of matter: physical properties which describe the material as it is, and chemical properties which show us how an element reacts. The idea to create the periodic table came from the idea that we can easily arrange all the elements in a format which would easily show similarity among groups. ...read more.

About fifty years later, John Newlands, an English chemist, discovered a new method for organising the elements and by this time lots of new elements had been discovered and had been measured much more accurately. He took Dobereiner?s simple ideas involving similar properties and improved them, by relating all the elements to each other to find a certain pattern. He found out that after intervals of eight, similar physical or chemical properties reappeared again in the element, so he decided to write a paper regarding this explaining his ?Law of Octaves?. Dmitri Mendeleev is a Russian Chemist who devised the periodic table we know to this very day. He took some of Newlands? ideas and improved on them, to devise his own table, which was quite similar to Newlands?. ...read more.

This is a very detailed essay. It describes in depth many of the significant discoveries in relation the the periodic table and gives some further explanation on the elements themselves.

I feel that the author has never really distinguished between arranging the periodic table by electron number as opposed to atomic mass. Also, a clearer introduction is necessary to provide structure to the essay.