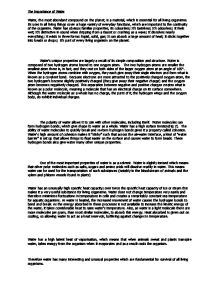 The importance of Water

The importance of Water Water, the most abundant compound on the planet, is a material, which is essential for all living organisms. Its uses in all living things cover a huge variety of everyday functions, which are important to the continuity of the organism. Water has obvious familiar properties, its colourless; It's tasteless; It's odourless; It feels wet; It's distinctive in sound when dripping from a faucet or crashing as a wave; It dissolves nearly everything; It exists in three forms: liquid, solid, gas; It can absorb a large amount of heat; It sticks together into beads or drops; It's part of every living organism on the planet. ...read more.

Although the water molecule as a whole has no charge, the parts of it, the hydrogen wings and the oxygen body, do exhibit individual charges. The polarity of water allows it to join with other molecules, including itself. Water molecules can form hydrogen bonds, which give shape to water as a whole. Water has a high surface tension(Fig 2). The ability of water molecules to quickly break and re-form hydrogen bonds gives it a property called cohesion. Water's high amount of cohesion makes it "sticky" such that across the air-water interface, a kind of "water barrier" is set up that allows things to float easier on the surface and causes water to form beads. These hydrogen bonds also give water many other unique properties. ...read more.

As water is heated, the increased movement of water causes the hydrogen bonds to bend and break. As the energy absorbed in these processes is not available to increase the kinetic energy of the water, it takes considerable heat to raise water's temperature. Also, as water is a light molecule there are more molecules per gram, than most similar molecules, to absorb this energy. Heat absorbed is given out on cooling, so allowing water to act as a heat reservoir, buffering against changes in temperature. Water has a high latent heat of vaporisation, which means that when animals sweat and plants transpire water, takes energy from the organism when it evaporates and as a result cools the organism. Therefore water has many interesting and unusual properties which are fundamental for survival of all living organisms. Fig 1 Fig2 ...read more.