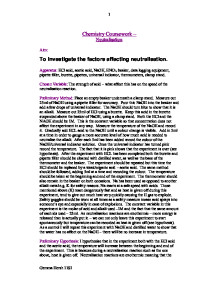 To investigate the factors affecting neutralisation.

Chemistry Coursework - Neutralisation Aim: To investigate the factors affecting neutralisation. Apparatus: HCl acid, acetic acid, NaOH, HNO3, beaker, data logging equipment, pipette filler, burette, pipettes, universal indicator, thermometers, clamp stand. Chosen Variable: The strength of acid - what affect this has on the speed of the neutralisation reaction. Preliminary Method: Place an empty beaker underneath a clamp stand. Measure out 25ml of NaOH using a pipette filler for accuracy. Pour this NaOH into the beaker and add a few drops of universal indicator. The NaOH should turn blue to show that it is an alkali. Measure out 25ml of HCl using a burette. Keep this acid in the burette suspended above the beaker of NaOH, using a clamp stand. Both the HCl and the NAOH should be 1M. This is the constant variable so that concentration does not affect the experiment in any way. Measure the temperature of the NaOH and record it. Gradually add HCL acid to the NaOH until a colour change is visible. Add in 5ml at a time in order to gauge a more accurate level of how much acid is needed to neutralise the alkali. After each 5ml has been added record the colour of the NaOH/universal indicator solution. Once the universal indicator has turned pink record the temperature. The fact that it is pink shows that the experiment is over (see hypothesis). After the experiment with HCL has been completed both the burette and pipette filler should be cleaned with distilled water, as well as the base of the thermometer and the beaker. The experiment should be repeated but this time the HCl should be replaced by a weak/organic acid - acetic acid. The same method should be followed, adding 5ml at a time and recording the colour. The temperature should be taken at the beginning and end of the experiment. The thermometer should also remain in the beaker on both occasions. ...read more.

This means the energy released is more than the energy put in. The energy is transferred from the reactants to the air. The heat of reaction will therefore be negative because Heat of reaction = energy of products - energy of reactants. Seen as though the temperatures both before and after the experiment were the same for both acids, the amount of heat produced was also the same - 3 C. Heat of neutralisation is the heat absorbed when 1 mole of hydrogen ions neutralise 1 mole of hydroxide ions or in other words, how much energy is released for every mole of water made (water because H + OH --> H2O). I know from my background knowledge that the heat energy released per mole of water for HCL + NaOH --> NaCl + H2O is -57.9KJ/mole. The minus simply means heat is released, as this is an exothermic reaction. (As heat = energy of products - energy of reactants and the energy in the products is less than that in the reactants because this is an exothermic reaction so energy is given off making less energy at the end). If we times this by the number of moles our product has we can therefore work out an expected energy rise. This is because rise in energy = heat energy x moles. E.g. If we use 25ml of HCl and 25ml of NaOH, both of 1M then: Concentration x Volume = moles = 1 x (25/1000) = 25 x 10 � for both HCl and NaOH because they are both the same concentration and volume. As HCL + NaOH --> NaCl + H2O we can see that if 25 x 10 � of acid is used, then 25 x 10 � of H2O is also produced. The predicted energy rise is therefore 25 x 10 � x -57.9 (heat energy x moles) = 1.4475 KJ/mole. ...read more.

This was due to lack of time but because of this I am now not able to use my results because they do not show me a great enough comparison between strong and weak acids. I did not stir the solution between each titration, which meant that the colour could have changed a lot quicker but as I did not stir it I did not realise this. A lot more acid was used then was necessary in order to make the colour strong enough for me to see. This makes my results inaccurate. If I were to improve my experiment I would have to stir the solution of acid and alkali in between each 5mlk titration. I diluted the acids myself. This was because there was no 1M acid left and so I had to take the 2M and dilute it accordingly. I may have been inaccurate whilst diluting it and did not take into account paralex error. I could therefore have ended up with either a higher or lower concentration of acid than previously thought. This also makes my experiment and results inaccurate and probably played a big part in why my results were so inaccurate. I also had to dilute my own NaOH and the same errors could have occurred. By diluting my own acid and alkali meant that I could not use a pipette filler or burette for measuring. The purpose of using this equipment was to make my measuring more accurate. I could not use them and therefore my measurements were not as accurate as they could have been. The prongs of the data logging equipment were not washed between each titration. This means that some acid could have still been present in between each experiment and could have started to neutralise the alkali before the experiment was actually began and data logged. If I were to do this experiment again I would not only change what is written above but I would use a third acid (as I had planned to do). ?? ?? ?? ?? 1 Gemma Hersh 11SI ...read more.