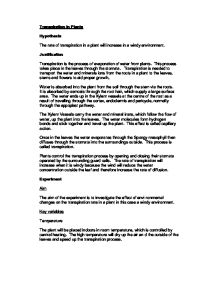 Transpiration in Plants Hypothesis The rate of transpiration in a plant will increase in a windy environment. Justification Transpiration is the process of evaporation of water from plants. This process takes place in the leaves through the stomata. Transpiration is needed to transport the water and minerals ions from the roots in a plant to the leaves, stems and flowers to aid proper growth, Water is absorbed into the plant from the soil through the stem via the roots. It is absorbed by osmosis through the root hair, which supply a large surface area. The water ends up in the Xylem vessels at the centre of the root as a result of travelling through the cortex, endodermis and pericycle, normally through the appoplast pathway. The Xylem Vessels carry the water and mineral irons, which follow the flow of water, up the plant into the leaves. The water molecules form hydrogen bonds and stick together and travel up the plant. This effect is called capillary action. Once in the leaves the water evaporates through the Spongy mesophyll then diffuses through the stomata into the surroundings outside. This process is called transpiration. Plants control the transpiration process by opening and closing their stomata operated by the surrounding guard cells. The rate of transpiration will increase when it is windy because the wind will reduce the water concentration outside the leaf and therefore increase the rate of diffusion. ...read more.

Time how long it takes the air bubble to travel 15 cm 12. Repeat experiment 2 more tomes 13. Repeat whilst adding hot air from the hairdryer The equipment is put together to make a potometer. The reason for placing the plant stem in the water before inserting in the tube is to prevent any air bubbles getting in. Extra care should be taken not to wet the leaves on the plant as this could effect the transpiration rate due to the high concentration of water molecules that are on the outside of the leaves Vaseline is smeared on the stem and at each opening the opening of the tube to prevent any air or water escaping. When the apparatus is assembled and the air bubble created it will start to move up the tube following the transpiration stream in the stem. The diffusion of water through the stomata will pull the water molecules, which cling together by capillary action towards the leaves travelling in the xylem vessels. The air bubble will move up the capillary tube at the same rate that the water is transpiring in the plant. The addition of the air stream to the plant will decrease the concentration of water molecules in the atmosphere. This will cause the molecules in the leaves to evaporate and diffuse more quickly thus sucking the water from the stem up the transpiration stream at a quicker rate, therefore increasing the transpiration rate. ...read more.

Transpiration in Plants Experiment The experiment could be improved by using a fresh living leafy shoot instead of one that was dying. The transpiration rate would on the whole be quicker than the previous experiment thus allowing time to conduct it three times for both circumstances and recording more results. A hairdryer would be a quicker and more controlled method for an air stream supply, which would also allow more time to repeat the experiment. A potometer with a tap attached would assist in removing unwanted air bubbles and a capillary tube with a scale would ensure more accurate results. Without the logistical problems there would have been more time to carry out repetitions of the experiment and record more results to be analysed. An experiment testing the change in transpiration rate for different environmental conditions could be carried out as follows: Humidity * Cover the plant with a plastic bag. Surface area * Smear the top of the leaves with Vaseline and then the bottom of the leaves, reducing the surface area where transpiration takes place. * Remove some of the leaves from the plant, reducing the surface area Even though the plant tested was dying, which induced a slower rate of transpiration than would be expected from a normal living plant and more repetitions could have been tested, the experiment satisfactorily proved that the rate of transpiration increases in a windy environment. ...read more.