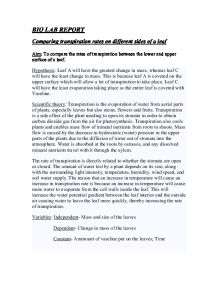 BIO LAB REPORT Comparing transpiration rates on different sides of a leaf Aim: To compare the rates of transpiration between the lower and upper surface of a leaf. Hypothesis: Leaf A will have the greatest change in mass, whereas leaf C will have the least change in mass. This is because leaf A is covered on the upper surface which will allow a lot of transpiration to take place. Leaf C will have the least evaporation taking place as the entire leaf is covered with Vaseline. Scientific theory: Transpiration is the evaporation of water from aerial parts of plants, especially leaves but also stems, flowers and fruits. Transpiration is a side effect of the plant needing to open its stomata in order to obtain carbon dioxide gas from the air for photosynthesis. Transpiration also cools plants and enables mass flow of mineral nutrients from roots to shoots. ...read more.

Variables: Independent- Mass and size of the leaves Dependant- Change in mass of the leaves Constant- Ammount of vaseline put on the leaves; Time Apparatus: A plant with stomata found mainly on the lower surface, eg: dicotyledonous leaves; a weighing machine; threads; vaseline; a scalpel. Method/ Procedure (In Steps): Step 1: Cut off three leaves of about the same size and surface area. Coat the petioles with Vaseline to prevent evaporation of water from the petioles. Step 2: Tie a thread to the end of each petiole so that the leaf can be hung up to dry. Note down the condition of each leaf, i.e. turgid or flaccid, withered or not. Step 3: We then treat the leaves as follows- Leaf A: Cover the upper surface with a thin layer of Vaseline. ...read more.

In Leaf A the Vaseline is on the top so there will be a lot of transpiration taking place as stomata pores on the underside of the leaf transpire the most and the fastest as a lot of stomata are present here. On the other hand Leaf C has been covered from all sides and will have the least change in mass. Evaluation: My investigation was a successful one as my predictions were proved right. The leaves set up in such a way that it was clear as to which leaf would transpire the most and which leaf would transpire the least. My results do not show a definite conclusion as Leaf C should have not changed in mass. My results could have been more accurate by repeating this experiment a number of times and doing it at different times of the day. This experiment could have also been more accurate if we had covered the stalk of the leaf also. ...read more.

***
Some errors in the planning and presentation of data together with a weak analysis make this an average account of a classic experiment.