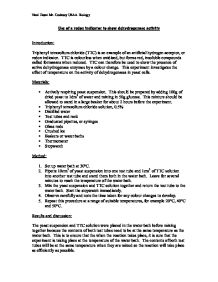 Use of a redox indicator to show dehydrogenase activity.

Use of a redox indicator to show dehydrogenase activity Introduction: Triphenyl tetrazolium chloride (TTC) is an example of an artificial hydrogen acceptor, or redox indicator. TTC is colourless when oxidised, but forms red, insoluble compounds called formazans when reduced. TTC can therefore be used to show the presence of active dehydrogenase enzymes by a colour change. This experiment investigates the effect of temperature on the activity of dehydrogenases in yeast cells. Materials: * Actively respiring yeast suspension. This should be prepared by adding 100g of dried yeast to 1dm3 of water and mixing in 50g glucose. This mixture should be allowed to stand in a large beaker for about 2 hours before the experiment. * Triphenyl tetrazolium chloride solution, 0.5% * Distilled water * Test tubes and rack * Graduated pipettes, or syringes * Glass rods * Crushed ice * Beakers or water baths * Thermometer * Stopwatch Method: 1. Set up water bath at 30?C. 2. Pipette 10cm3 of yeast suspension into one test tube and 1cm3 of TTC solution into another test tube and stand them both in the water bath. ...read more.

The overall accuracy of the experiment could have been improved if the whole experiment was repeated two or three times and an average for each temperature taken. In organic molecules oxidation involves the removal of both electrons and protons. This process is called dehydrogenation. Dehydrogenases are enzymes that catalyse these reactions. In cell respiration, dehydrogenases are used in the first part of the breakdown of glucose (glycolysis). The two trioses produced after the splitting of fructose-1,6-biphosphate undergo dehydrogenation. The hydrogen atoms produced by this reaction are taken up by NAD+ to from NADH + H+. The electrons then pass along a series of electron carriers, making up the electron transport system. This electron chain then results in ATP synthesis, which is of course the point of respiration. The role of dehydrogenases is also seen in the Krebs cycle. Four of the steps in the Krebs cycle involve the removal of pairs of hydrogen atoms, which are catalysed by NADH dehydrogenase or succinate dehydrogenase. In the same way, the NADH + H+ goes on to the synthesis of ATP from ADP and Pi. Neal Desai Mr. Cooksey U6AA Biology ...read more.

****
Good biochemical knowledge demonstrated but a little more attention to detail is needed for a 5 star rating. Some discussion of the effects of temperature on enzyme activity would be relevant and helpful.