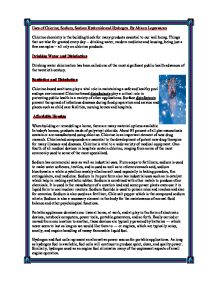 Uses of Chlorine, Sodium, Sodium Hydroxide and Hydrogen. By Abison Logeswaran Chlorine chemistry is the building block for many products essential to our well being. Things that we take for granted every day -- drinking water, modern medicine and housing, being just a few examples -- all rely on chlorine products. Drinking Water and Disinfection Drinking water chlorination has been called one of the most significant public health advances of the twentieth century. Sanitation and Disinfection Chlorine-based sanitizers play a vital role in maintaining a safe and healthy pool and spa environment Chlorine-based disinfectants play a critical role in protecting public health in a variety of other applications. Surface disinfectants prevent the spread of infectious diseases during food preparation and service and places such as child care facilities, nursing homes and hospitals. Affordable Housing When building or remodeling a home, there are many material options available. In today's homes, products made of polyvinyl chloride. ...read more.

Sodium is also used as a fertilizer, Chile salt pepper which is the compound sodium nitrate. Sodium is also a necessary element in the body for the maintenance of normal fluid balance and other psychological functions. Portable appliances dominate our lives at home, at work, and at play in the form of electronic devices, notebook computers, power tools, portable generators, and so forth. Easily carried or moved from one location to another, these devices are typically powered by batteries - which never seem to last as long as we would like them to - or engines, which are typically noisy, smelly, and require handling of messy flammable liquid fuel. Hydrogen and fuel cells represent an alternative power source for portable applications. As long as hydrogen fuel is available, fuel cells will continue to produce quiet, clean, and quality power. Similarly, hydrogen used as an engine fuel eliminates many of the unpleasant aspects of small engine operation. ...read more.