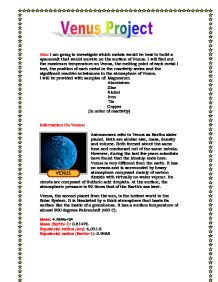 Aim: I am going to investigate which metals would be best to build a spacecraft that would survive on the surface of Venus. I will find out the maximum temperature on Venus, the melting point of each metal I test, the position of each metal in the reactivity series and the significant reactive substances in the atmosphere of Venus. I will be provided with samples of: Magnesium Aluminium Zinc Nickel Iron Tin Copper (In order of reactivity) Information On Venus: Astronomers refer to Venus as Earths sister planet. Both are similar size, mass, density and volume. Both formed about the same time and condensed out of the same nebula. However, during the last few years scientists have found that the kinship ends here. Venus is very different from the earth. It has no oceans and is surrounded by heavy atmosphere composed mainly of carbon dioxide with virtually no water vapour. ...read more.

Copper is not very reactive because it has five shells of electrons, four of them are full, and the outer one has three electrons. An atom which only needs one electron to make a full shell is much more reactive than one that needs to loose three or gain five. The surface of Venus is very acidic and reactive; it is made up of Sulphuric acid. This means that if the spacecraft were made out of Copper the reaction would be: Copper + Sulphuric Acid = Copper Sulphate + Hydrogen Method: What I will need: Sulphuric Acid Magnesium Aluminium Zinc Nickel Iron Copper Measuring Cylinder Scales Test Tubes and Rack * I will collect the seven different metals and weigh them, and record the weights in my results table. * I will have two examples of each metal to make the test as fair as possible e.g. ...read more.