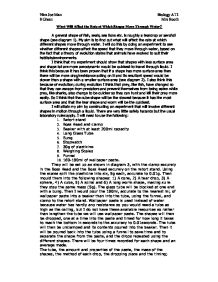 What Will Affect the Rate at Which Shapes Move Through Water?

What Will Affect the Rate at Which Shapes Move Through Water? A general shape of fish, seals, sea lions etc. is roughly a teardrop or aerofoil shape (see diagram 1). My aim is to find out what will affect the rate at which different shapes move through water. I will do this by doing an experiment to see whether different shapes affect the speed that they move through water, based on the fact that a theory of evolution states that animals have evolved to suit their habitats/environments. I think that my experiment should show that shapes with less surface area and shape tat are more aerodynamic would be quickest to travel through liquid. I think this because it has been proven that if a shape has more surface area then there will be more drag/resistance acting on it and its resultant speed would be slower than a shape with a smaller surface area (see diagram 2). I also think this because of evolution; during evolution I think that prey, like fish, have changed so that they can escape from predators and prevent themselves from being eaten while prey, like sharks, also change to be quicker so they can hunt and kill their prey more easily. So I think that the cube shape will be the slowest because it has the most surface area and that the tear shape and worm will be the quickest. ...read more.

The amount of paste would be kept the same because if there were more paste there would be more resistance and further to travel therefore taking a longer time. The paste will be kept the same so that the thickness will be the same because if the paste is thicker then there will be more resistance and the shape will take longer to travel down the tube. The mass of the shapes will have to be the same because the point of the experiment is to find whether different shapes affect the speed of the shape in the paste. So if the mass is more then no matter what the shape is, it will sink faster because there is more mass so therefore more weight (bigger gravitational pull). The method of each drop would be kept the same because the only variable is the shape so if the method were different for each shape it wouldn't be a fair test. I.e. the way the positioned for the drop. If the shape were put it one way for one drop but a different way for another drop then the times would be very different because there may be more surface area so that the shape will be slower. The shapes would have to be dropped at the same place, i.e. from the top of the tube rather than the top of the paste or 10cm on top of the tube. ...read more.

I think that the experiment was reasonably good way of testing the aim so I have some confidence that my results are able to be used compared with real nature but there could have been changes to make the results more reliable. The problems were the artificial conditions, which limited my confidence in the results. The problems were that the shapes were going vertically in the liquid but in nature most creatures go horizontally propelled by their own energy and by the moving current of the water and not by the force of gravity. The paste did not act as water would and was only used because of the property of water that meant there was very little resistance. The shapes were also simplified and shapes that aren't usually seen in nature have been used in this experiment. I still think however that this is still linked to life. In life more streamlined shapes do actually travel faster than ones with a very big surface area but the artificial conditions made this point quite limited although being true. I think I would do an extension to this experiment. I would do this using water that flows of its own current horizontally as a first. Then the shapes would have to be shaped like proper animals and creatures. I think this would be done maybe in a stream to make it even more reliable and would be a very good extension to my experiment. Nim Joe Man Biology AT1 8 Green Mrs Booth ...read more.