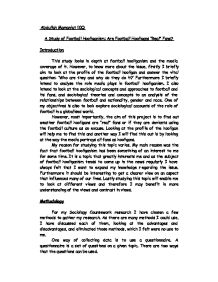 Abdullah Mamaniat 10Q A Study of Football Hooliganism: Are Football Hooligans "Real" Fans? Introduction This study looks in depth at football hooliganism and the media coverage of it. However, to know more about the issue, firstly I briefly aim to look at the profile of the football hooligan and answer the vital question: 'Who are they and why do they do it?' Furthermore I briefly intend to analyse the role media plays in football hooliganism. I also intend to look at the sociological concepts and approaches to football and its fans, and sociological theories and concepts to an analysis of the relationships between football and nationality, gender and race. One of my objectives is also to look explore sociological accounts of the role of football in a globalised world. However, most importantly, the aim of this project is to find out weather football hooligans are "real" fans or if they are deviants using the football culture as an excuse. Looking at the profile of the hooligan will help me to find this and another way I will find this out is by looking at the way the media portrays all fans as hooligans. My reason for studying this topic varies. My main reason was the fact that football hooliganism has been something of an interest to me for some time. It is a topic that greatly interests me and as the subject of football hooliganism tends to come up in the news regularly I have always felt that I want to expand my knowledge regarding the issue. Furthermore it should be interesting to get a clearer view on an aspect that influences many of our lives. Lastly studying this topic will enable me to look at different views and therefore I may benefit in more understanding of the views and contrast in views. Methodology For my Sociology Coursework research I have chosen a few methods to gather my research. ...read more.

It must be the result of "animal instinct" or the uncontrolled impulse of the insane " When stereotypes are accepted, then solutions to the problems are often proposed that match them. If certain events have been labelled as the actions of "animals' or 'insane', it then appears right to treat the people who commit those actions as though they were 'animals' or 'insane'. In discussing football violence one newspaper suggested that 'they put these people into "hooligan compounds" every Saturday afternoon... They should be herded together... We should make sure we treat them like animals.' Sociologists would say that the stereotype legitimises the way the problem is dealt with. In other words it provides the person who must deal with the problem with a way of dealing with it that is likely to be generally acceptable. This is known as legitimation. In summary as Hall said in 1978, "it is certainly true that newspapers generally report on football using the sort of language which seems to derive more from the world of war than it does from sport." This probably helps to heighten rivalry between opposing fan group, as do the 'predictions' newspapers make before the game that 'trouble' is likely to occur between rival fans or that the police and local residents are preparing for an 'invasion' of visiting fans or are being placed on 'red alert.' It is also evident that the media plays a very significant role in the public's view of football hooliganism. By far the biggest problem lies in the sensationalist reporting of the British tabloid press. The press has helped from the modern phenomenon of football hooliganism, it has shaped a public opinion of the problem and it has directly influenced the actions of fans themselves. There is also considerable evidence to support the claim that football hooligans enjoy press coverage and positively attempt to obtain coverage of themselves and their group. ...read more.

Therefore, I still needed to look at the profile of the football hooligan and answer the vital question: 'Who are they and why do they do it'. In addition as I was going to look at the way in which the media portrays all fans as hooligans I still needed to analyse the role media plays in football hooliganism. After re-organising my aims I was well underway with my coursework. Although at points I was tiny bit unsure if I was on the right lines as I realised it was really easy to get away form the topic I was studying. The research methods I used at the beginning were, I felt, very good in that I dint need to change them. For my primary data, after looking at the advantages and disadvantages of methods of collecting data, I chose my method which was an interview. The interview was very useful in that it helped me back up some points I made with real-life experiences or opinions. As for my secondary, which was mainly off the internet and textbooks. These were extremely helpful in helping me to find information. These were many few sources I needed, after the beginning, as I went through my coursework because I had carefully thought what type of information I needed. More importantly, I really wanted to interview real-life hooligans. However, as you know, this would take courage plus time therefore I decided against it. Luckily, during my research I did find an interview with a football hooligan. This was from Lucy Procter dissertation. In it she asked a couple of Man City fans who indulged in violence during the match. This interview was also very helpful in helping me to back up the points I was investigating. Overall, as I've said, I feel that this coursework has been done very successfully. In terms of weaknesses, I'm not sure if their has been any except for the fact that I wasn't confident if I was doing the right thing at points. ...read more.