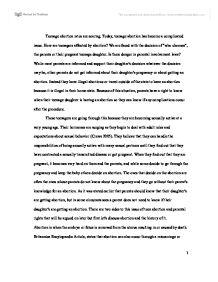 Teenage abortion rates are soaring. Today, teenage abortion has become a complicated issue. How are teenagers affected by abortion? We are faced with the decision of "who chooses", the parents or their pregnant teenage daughter. Is there danger in parental involvement laws? While most parents are informed and support their daughter's decision whatever the decision may be, other parents do not get informed about their daughter's pregnancy or about getting an abortion. Instead they have illegal abortions or travel outside of the state to have an abortion because it is illegal in their home state. Because of this situation, parents have a right to know when their teenage daughter is having an abortion so they can know if any complications occur after the procedure. These teenagers are going through this because they are becoming sexually active at a very young age. Their hormones are surging as they begin to deal with adult roles and expectations about sexual behavior (Crews 2005). They believe that they can handle the responsibilities of being sexually active with many sexual partners until they find out that they have contracted a sexually transmitted disease or got pregnant. When they find out that they are pregnant, it becomes very hard on them and the parents, and while some decide to go through the pregnancy and keep the baby others decide on abortion. ...read more.

The NARAL, Pro-Choice America, which is one of the nation's most aggressive abortion rights advocates, argues that the Child Custody Protection Act is dangerous and divisive (Larkins 2006). There are only six states without laws that require either parental consent or notification for minors seeking abortions according to the National Conference of State legislatures. The six states are Connecticut, Hawaii, New York, Oregon, Vermont and Washington State. As a result, those six states have become destinations for minors seeking abortions without having to tell their parents. Democratic Senators, Diane Feinstein and Barbara Boxer of California, proposed amendments that would weaken the bill (Larkins 2006). Feinstein's amendment allows grandparents or members of the clergy to take a minor out of state for an abortion. Boxer's amendment proposes that the bill not apply to any minor who has and abortion as a result of pregnancy by incest. The director of government relations for Concerned Woman for America is concerned that Feinstein's amendment would require anyone to go online and complete an ordination process to become a clergyman. They are also concerned that the Boxer amendment would allow a sibling, who has gotten his sister pregnant, to take the girl across state line to get an abortion. These amendments that Feinstein and Boxer are trying to pass undermine the Child Protection Act, which is to protect the parent's authority with their child. ...read more.

For fear that the father would become abusive towards the teen because she is pregnant and wants to abort the baby. In this situation, there should not be a law to inform parents of an abortion. As it was stated earlier, I do not believe in abortion but when a teen is impregnated by a member of her family it should be done because it has quite the psychological impact on the teen. I don't think abortion should be done when a girl has sex and she willingly accepts it. I believe if a girl has sex, she is accepting everything that comes with it even getting pregnant, and need to do use good judgment and practice safe sex. No one has the right to take the life of a pre born baby even if they do not want it. There are other options for teens to consider if they do not want to be a parent. They could put the baby up for adoption. There are many couples that cannot have children and would love to adopt a baby. If they do not want to get pregnant then they should not be having unprotected sex in the first place. In conclusion, abortion among teen is a complicated issue. Teens need their parent's support to help them get through the effects that abortion may have on them. The effects of teenage abortion will stay with them throughout their lives without the proper counseling. ...read more.