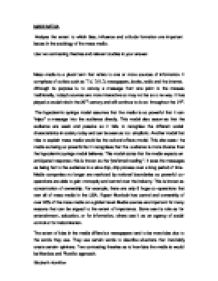 Analyse the extent to which bias, influence and attitude formation are important issues in the sociology of the mass media. Use two contrasting theories and relevant studies in your answer.

MASS MEDIA Analyse the extent to which bias, influence and attitude formation are important issues in the sociology of the mass media. Use two contrasting theories and relevant studies in your answer. Mass media is a plural term that refers to one or more sources of information. It comprises of outlets such as T.V, D.V.D, newspapers, books, radio and the internet. Although its purpose is to convey a message from one point to the masses traditionally, today's sources are more interactive so may not be so one way. It has played a crucial role in the 20th century and will continue to do so throughout the 21st. The hypodermic syringe model assumes that the media is so powerful that it can "inject" a message into the audience directly. This model also assumes that the audience are weak and passive so it fails to recognise the different social characteristics in society today and can be seen as too simplistic. Another model that tries to explain mass media would be the cultural effects model. This also sees the media as being so powerful but it recognises that the audience is more diverse than the hypodermic syringe model believes. This model states that the media expects an anticipated response; this is known as the "preferred reading". ...read more.

They do this by for example, news articles that they feel is newsworthy therefore the masses will feel it as newsworthy and important. This position allows us to see the subtlety of the process of capitalist control. Neo Marxist sees the media's message as coded so to help the masses understand the world and link event to make them seem important. As it is capitalists who control the media, they are therefore dictating to the masses what they should see as important through these coded messages, maintaining their power and control. Marxist view is a strong analysis of the mass media as a source of inequality within society and helps explain bias in the media. It is also a good at explaining the power of the media through concentration of ownership. For example, only 5 co operations own all of America's media which gives them huge power and control. Marxist theory can be criticised as it underestimates the fact that the masses have the ability to make their own mind up over what they see/hear/read. It assumes the masses will believe everything the ruling class project to them and cannot reject it. As mass media is so interactive now, it is possible for capitalist ideology to be challenged by the masses. ...read more.

They argue that if the media is bias then this is merely a reflection of what people want and think. The pluralist approach is strong in recognising the range and diversity within mass media. It is a more likely theory to explain mass media in today's more interactive society. The recent phone hacking scandal suggests that employees at News International newspapers have been prepared to break the law in order to secure information which has infringed individual privacy. However you might also argue that the fact that this story has come to light in the mass media illustrates its investigative qualities which also provides some support for the pluralist approach to the study of the mass media and that if Rupert Murdoch's plans to take full ownership of BSkyB are blocked this will help to restrict the extent of monopoly ownership and control within the mass media therefore restricting bias opinion projected in the mass media. The pluralist approach can be critised for not recognising the clear evidence of bias. Although the pluralist approach may be seen as a more modern view of the mass media and does recognise consumer choice, it is evident that the mass media are clearly bias and our views may be distort our views of the world as we see it through "their" eyes and a neutral view is very rarely shown in mediums such as newspapers and 24hour news channels. ?? ?? ?? ?? Elizabeth Hamilton ...read more.

A strong piece of work examining the role of the media in relation to bias and attitude formation. The writer shows a good understanding of the theories discussed, particularly Marxist theory. All the key points I would expect to see in answer to the essay question are presented, just remember to explain briefly key terminology to evidence your understanding (see annotations).
Please check punctuation, spelling and grammar carefully as there are a few errors that affect the readability of the work. 4/5