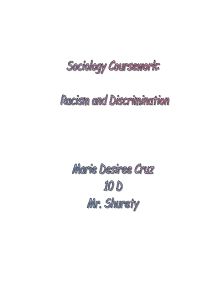 In this investigation, I am trying to find out the public people's opinions about the topic, racism

Introduction: In this investigation, I am trying to find out the public people's opinions about the topic, racism and discrimination in this country. It is the purpose of this coursework to find out the percentage of the people who are against racism and discrimination as well as the percentage of the people who just does not seem to care about this particular issue. All efforts have been exerted to come out with unbiased and fair results. Racism is the belief in the idea of the existence of distinctive 'races' and that some races are superior to other races. ...read more.

Target groups were the working class people, who belong to the different ethnic minority group such as black Caribbean, black African, Indian, Pakistani and other Asian groups. Both male and female gender was targeted for this investigation. I have chosen these certain types of people because they are more likely to be bullied than the whites and of the middle class and upper class society. I have conducted some readings in a sociology textbook that they are the group of people who are more likely to be bullied simply because of their ethnic characteristics and the norms and values they had practiced. ...read more.

Questionnaires are very useful for reaching a widely spread group of people. It is also relatively cheap and can give much more time for the respondents to answer the questions and also to avoid interview bias, in which the way the respondent answers the question is affected by the presence of the interviewer. Secondary sources will also be used. These include all the statistics and information collected by other people such as newspaper articles, sociology textbooks and the Internet. These secondary sources will serve as background information for understanding the study much better. Either primary or secondary sources, these largely contribute to the attainment of the goal of this sociology coursework. ...read more.