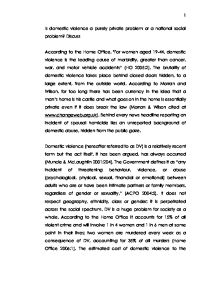 Is domestic violence a purely private problem or a national social problem?

Is domestic violence a purely private problem or a national social problem? Discuss According to the Home Office, "For women aged 19-44, domestic violence is the leading cause of morbidity, greater than cancer, war, and motor vehicle accidents" (HO 2005:2). The brutality of domestic violence takes place behind closed doors hidden, to a large extent, from the outside world. According to Morran and Wilson, for too long there has been currency in the idea that a man's home is his castle and what goes on in the home is essentially private even if it does break the law (Morran & Wilson cited at www.changeweb.org.uk). Behind every news headline reporting an incident of spousal homicide lies an unreported background of domestic abuse, hidden from the public gaze. Domestic violence (hereafter referred to as DV) is a relatively recent term but the act itself, it has been argued, has always occurred (Muncie & McLaughlin 2001:204). The Government defines it as "any incident of threatening behaviour, violence, or abuse (psychological, physical, sexual, financial or emotional) between adults who are or have been intimate partners or family members, regardless of gender or sexuality." (ACPO 2004:5). It does not respect geography, ethnicity, class or gender; it is perpetrated across the social spectrum. DV is a huge problem for society as a whole. According to the Home Office it accounts for 15% of all violent crime and will involve 1 in 4 women and 1 in 6 men at some point in their lives; two women are murdered every week as a consequence of DV, accounting for 35% of all murders (Home Office 2006:1). ...read more.

It is only in the latter part of the twentieth century that we see the issue of DV being taken as a serious social problem. According to Dobash & Dobash (1992:1), since the 1970s, the efforts of women's organizations and the battered-women's movement have raised the issue of the unacceptability of violence against women to an international social level, resulting in a profound transformation in public awareness of the problem. As Hammer and Leonard comment, "It took four years from 1971 to 1975 to bring violence to women out of the shadows and turn it from a private sorrow into a public issue." (Hammer & Leonard 1984, cited in Warrington 2003:126). Such violence is now widely acknowledged as being a serious human rights and public health issue that concerns every sector of society. The Feminist perspective of the 1970s and 1980s emphasized the power and control aspect of the traditional family and highlighted the visible inequalities and power relationships found within it (Muncie & McLaughlin 2001:196). Hall states that, "the family is central to power relations between the sexes.....subordination and controlled economic, political and social life." (1992:14). Theorists accentuated the myth of the happy family unit and challenged the notion that acts of violence in the home were private family matters, bringing the private into the public realm. According to Dobash & Dobash, "in doing so they opposed a long patriarchal tradition in which indifference and antagonism toward changes in the status of women reflected cultural beliefs about the 'natural' hierarchical relationship between husband and wife." ...read more.

Society's main focus was the sanctity of the family and the myth of familial bliss. For centuries, "an almost dogmatic adherence to such ideas meant that the family was analogous to a fortress, closed off completely from the outside world." (Dobash & Dobash 1979:7). Society chose to avert its eyes from reality but we have been forced to acknowledge the truth that for many, the family is a site of horrible abuse and fear. Yes, domestic violence occurs behind closed doors; within the so called privacy of the family, but this does not give society an excuse to close its eyes to the problem. It is a private fear experienced by thousands but it is a public problem. Walklate writes, "Change is occurring both in the recognition of intimate violence as a social problem and in women's increasing unwillingness to remain silent about their experiences of male violence." (2004:139). For a long time, the biggest challenge facing policy makers was the fact that abuse remained hidden. Now that this is beginning to change, it is crucial that positive policy decisions are made. Changes in how young men and women are educated in their relationships with each other are needed, as are more resources to help and protect those victims who find the courage to leave an abusive partner; it is at this time that they are most vulnerable. Harriet Harman MP said, "We need a culture change which ends the excuses and ensures that people can live in their own homes free of fear." (HO Press Office 2006). ...read more.