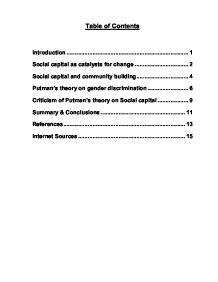 Table of Contents Introduction 1 Social capital as catalysts for change 2 Social capital and community building 3 Putman's theory on gender discrimination 5 Criticism of Putman's theory on Social capital 7 Summary & Conclusions 9 References 10 Internet Sources 12 Introduction Social capital has gained tremendous popularity in recent years, driven in large part by the work of James Coleman, Pierre Bourdieu, and Robert Putaman. This increased attention for social capital is evident among several research topics, conference papers, dissertations, and educational journals. Social capital is the name given to a store of value generated when a group of individuals invests resources in fostering a body of relationships with each other (a "social network"). These relationships, it is argued, create trust by fostering shared norms, improve contract enforcement by easing information flows, and enhance sanctions against deviant behavior by facilitating collective action. Hence the real meaning of social capital is the quality of social relations. It is the quality of relationships, understood through the use of the concept "social capital", which affects the capacity of people to come together to collectively resolve problems they face in common (Stewart-Weeks and Richardson, 1998), and achieve outcomes of mutual benefit (Lochner et al. 1999). Thus, social capital can be understood as a resource to collective action, which may lead to a broad range of outcomes, of varying social scale. For individuals, this can mean access to the reciprocal, trusting social connections that help the processes of getting by or getting ahead. For communities, social capital reflects the ability of community members to participate, cooperate, organise and interact (Cavaye 2001). The narrowest concept of social capital is associated with Putnam. Putnam defines social capital as 'trust, norms and networks' that facilitate cooperation for mutual benefit. (Putnam, 1993). ...read more.

After examining data mainly from the DDB Needham Life Style surveys, and acknowledging gender differences in some common forms of community associations, such as PTAs, churches and professional organizations, he concludes that during the last two decades the movement of women into the paid labor force can account for only a modest amount of the total shrinkage of social capital in America: "With fewer educated, dynamic women with enough free time to organize civic activity, plan dinner parties, and the like, the rest of us, too, have gradually disengaged. At the same time, the evidence also suggests that neither time pressures nor financial distress nor the movement of women into the paid labor force is the primary cause of civic disengagement over the last two decades...civic engagement and social connectedness have diminished almost equally for both women and men, working or not, married or single, financially stressed or financially comfortable." (Putman ,2002) In more recent work, however, he does draw a useful distinction between 'bridging' and 'bonding' groups. In Putnam's words: "Bridging social capital refers to social networks that bring together people of different sorts, and bonding social capital brings together people of a similar sort. This is an important distinction because the externalities of groups that are bridging are likely to be positive, while networks that are bonding (limited within particular social niches) are at greater risk of producing externalities that are negative." For example heterogeneous bridging local associations such as the Red Cross are believed to have beneficial consequences for building social capital and social equality, by generating interpersonal trust and reinforcing community ties. On the other hand homogeneous bonding organizations can also provide positive functions, by benefiting members. ...read more.

This is most obvious when it comes to forms of social capital that were illiberal and socially exclusivist. But the decline of other forms of social capital, such as bowling leagues, may not be all that significant, if they do not lend themselves to being mobilized for new forms of community problem solving and trust building. The decline of church attendance may be far more significant. Summary & Conclusions In this essay the role of social capital in empowering individuals and communities who experience inequality and gender discrimination has been examined. Putman's theory on gender discrimination has been used in order to support the inequality of women's in society. As we have seen social capital is a social resource to which individuals, families, neighborhoods and communities have access. It has a well established relationship with several areas of policy interest, including economic growth, social inclusion, and educational attainment, levels of crime, improved health and more effective government. The key indicators of social capital include social relations, formal and informal social networks, group membership, trust, reciprocity and civic engagement. The broader literature on civic engagement and political activism suggests that gender differences in community are created by the factors of structure, culture and agency. I believe that by advancing gender equality and equity and the empowerment of women, and the elimination of all kinds of violence against women, and ensuring women's ability to control their own fertility, are cornerstones of community development. The human rights of women are integral part of universal human rights. The full and equal participation of women in civil, cultural, economic, political and social life, at the national, regional and international levels, and the eradication of all forms of discrimination on grounds of sex, are priority objectives of the community development. ...read more.