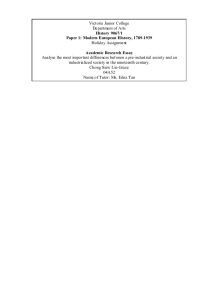 Tom Kemp hailed the Industrial Revolution as a "transformation of a traditional agrarian economy into an urban society based on machine technology". The industrialized societies of France, Britain and Germany saw a revolution marked by various economic, social and political changes which varied in their relative importance and lasting consequences on European society. In examining the separate effects of the Industrial Revolution on a pre-industrialized society marked by primitive technology and a lack of specialization, we must bear in mind that the process of industrialization had varied effects in different countries. Through an evaluation of the various differences, we will see that although these factors were often harmonized in creating the overall impact of industrialization, differences like the introduction of the factory system and the improvement in transports and communications had the most far reaching impact on European society. The introduction of the factory system into Europe pronounced the most significant change in the era of industrialization. The mechanization of the manufacturing process was a basic characteristic of the revolution, with the use of machinery exploiting new sources of productive energy and the power of air and water harnesses replacing animal labour. This was developed on a large scale in Britain for manufacturing in the 18th century, which was blessed with an abundance of coal that provided the pioneers of industrialization with raw material, and had a royal navy that maintained political security that stimulated business enterprise. As a result, textiles and mining were among the first branches of the economy that felt the effects of mechanical invention in Britain and came under the factory system. Technological advances like the fly shuttle and the spinning jenny contributed to the advance of the factory system as these were too bulky and expensive for home use and only suitable for large, coordinated output. All these meant that factories in Manchester, Paris and the Rhineland now became the microcosm of a larger, revolutionized system of job specialization, regimentation and massive increases in production. ...read more.

Industrialization also fermented many other doctrines and ideologies arising because of the exploitation of workers in factories, supporting and criticizing the newly emerging society like J S Mill's humanitarian liberalism, and Marxism. William Carr put forward that "dynastic loyalties were crumbling and religious beliefs were fading fast, nationalism supplied a brand new social cement to hold society together." Eric Hobsbawn even mentioned "the small craft workers of Vienna sacrificed their religious practices, 'transferring their faith to socialism.'" Secularization of society with the transfer of faith to socialism led to breakdown of normal controls that had prevailed in the more traditional society of the countryside, with strikes and rebellions spreading through the country. Economic theory, like Adam Smith and the theory of laissez faire, and the classical theories of David Ricardo and Thomas Malthus flourished, with a stimulation of scientific interests, questioning the state of affairs and a change of emphasis on logic and practicalities. Thus, industrialized society differed greatly from pre-industrialized society in terms of intellectual and cultural thought, and this was important because it affected their way of life, political interests and behavior, and also the move away from religion towards logic. This was a vast difference from the past society, as they had begun to question the state of affairs in their current society, and take action for the kind of society they envisioned in mind, which was rarer in rural society which tend to follow the line of religion in their daily lives. The advancement of transport and communications was also one of the notable differences of both societies, and indeed there was an intricate link, for improvements in transport of freight were at the heart of improved industrial performance. Previously, it took a long time to travel from one part of Germany to the other, and international trade was hindered by the lack of communication systems. Now, there were new methods of distribution of goods with the improvements to roads and canals, with the British waterways and German autobahns, and Samuel Conard founded the first great steamship enterprise. ...read more.

The expansion of farm production also led to reduced famine and a high degree of specialization in farming. This phenomenon meant that a smaller proportion of population was involved in agriculture without compromising on output. By 1870, Britain produced 300% more output but only 14% of the people worked on the land. This improved harvest meant that there was an increase in real income and purchasing power, thus leading to a greater demand for mass manufactured goods and stimulating further industrial growth. However, the Agricultural Revolution had actually already begun before the Industrial Revolution, and the emphasis still lay in the factories at the heart of cities, and not in the rural areas. Thus the change was more of an addition of technological tools and organization for agriculture, but it was less outstanding compared to the differences in other economic and social aspects of society like the factory system. Based on the analysis of the points above, the more important differences between a pre-industrialized society and industrialized society lay in the factory system, the social consequences on society in the change of lifestyle and attitudes, transport and communications, and intellectual developments. There were more venial changes in the form of urbanization, political changes, and agricultural developments, but the former overshadowed them. Of all these changes, the factory system was the most significant change as it introduced a new structure of the economy, a new way of life which in fact was the rationale for improved transport and communications, urbanization, which in turn also gave rise to the social consequences, intellectual developments, political changes etc. What really marked the difference between both societies was not so much a change in population structure, or production, but rather a revolutionizing of thought and lifestyle, which was to have spillover effects on every other sector, and as Mokyr suitably puts, "In two centuries daily life changed more than the 7000 years before." All these contributed to make the Industrial Revolution the turning point of the century. Chong Siew Lin Grace 04A52 Dear Ms. ...read more.