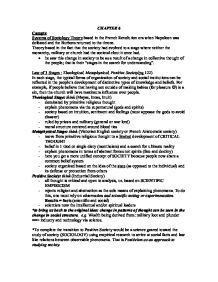 Systems of Sociology Theory based in the French Revolution era when Napoleon was defeated and the Burbons returned to the throne.

CHAPTER 6 Compte Systems of Sociology Theory based in the French Revolution era when Napoleon was defeated and the Burbons returned to the throne. Theory based in the fact that the society had evolved to a stage where neither the monarchy, military or church had the societal clout it once had. * he saw this change in society to be as a result of a change in collective thought of the people; that is their "stages in the search for understanding". Law of 3 Stages : Theological, Metaphysical, Positive Society(pg.122) In each stage, the typical forms of organization of society and social institutions can be reflected in the people's development of distinctive types of knowledge and beliefs. For example, if people believe that having sex outside of making babies (for pleasure :)) is a sin, then the church will have maximum influence over people. Theological Stage: think (Mayas, Incas, Inuit) - dominated by primitive religious thought - explain phenomena via the supernatural (gods and spirits) - society based on intuition, sentiment and feelings (must appease the gods to avoid disaster) - ruled by priests and military (general or war lord) - moral structure centered around blood ties Metaphysical Stage: think (Victorian English society or French Aristocratic society) - move from primitive religious thought to a limited development of CRITICAL THOUGHT - belief in 1 God or single diety (montheism) and a search for ultimate reality - explain phenomena in terms of abstract forces not spirits (fate and destiny) - here you get a more unified concept of SOCIETY because people now share a common belief system - society organized based on the idea of the state (as opposed to the individual) and its defense or protection from others Positive Society: think (Industrial Society) - all thought is critical and open to analysis, i.e. based on SCIENTIFIC EMPIRICISM - rejects religion and abstraction as the sole means of explaining phenomena. ...read more.

Major cause of anomie is forced or unjust division of labour. To fix ==> 1. division should correspond to natural talents of people (free occupational choice) . 2. when people enter contracts they should be equal and the contract fair and entered into freely (people shouldn't be forced). * There should be no ascribed status because being born into a social position sets up an inherent inequality in contracts. Another cause of anomie is Fractionalized work i.e. when a task is broken down into discrete components e.g. assembly line work. Here persons become divorced from the process when they are unable to see the task through. This leads to loosing feelings of solidarity and continuity i.e. persons can't see themselves as part of the organization and there is a loss of pride in one's work because it has become uninteresting. REGULATION = CURE FOR ANOMIE (look at Laissez Faire systems and regulation pg.129 for solution for Anomie) 2 Studies done be Durkheim to investigate his theories of the nature of social solidarity and anomie: 1. SUICIDE and 2. RELIGION. Suicide Hypothesis: Human happiness depends upon social cohesion therefore when social solidarity breaks down or weakens, levels of unhappiness within a community increases. * to make his study empirical and scientific, he used SUICIDE RATES as concrete observable phenomena to infer intangibles like unhappiness and cohesion (both subjective states). Suicide = "intentional self-death by any action known to have that effect". It is the number of people per 100,000 who intentionally take their own lives. * SUICIDE RATE = SOCIAL FACT His Theory: Specific kinds of social conditions that lead to a weakening of social solidarity engender increasing unhappiness and higher suicide rates. 3 Types of Suicide: 1. Egoistic Suicide 2. Anomic Suicide 3. Altruistic Suicide Egoistic: This type of suicide occurs when people have poor or weak social bonds to their society i.e. when a society is poorly integrated. Durkheim used religious affiliation and marital status as indicators of how strong social bonds were. ...read more.

In your reading, look at Weber and the differences between Puritanism (Methodism) and Calvinism. Pg140-142 Then at how religion can be used as a TOOL for responsible social action re:Social Gospel in Canada and Liberation Theology. Religion as Social Construction In PET and Functionalism, religion is seen as a social institution In Interpretive Theory, religion is seen as an ongoing accomplishment i.e. something that people DO rather than HAVE. - So religion is no longer a list of elements that make up religious life BUT it now is a question of how people in their daily lives make for themselves a sense of religious identity and how it is interpreted as tradition. - Ancient practices and beliefs themselves are social constructions since they themselves have been stressed in order to legitimate current practices. PET and Int. Theorists agree that Constructionists and Marxist analysis of religion both draw attention to the practical and political significance of identity formation through religion (look at Menonites and Natives). Feminist Critique of Religion Fem& PET==>both believe that religion (dominant ideas and values within a society) provides justification for the ruling class position. * feminists switch focus from economic classes to PATRIARCHY * According to Engels, male subjugation over is the first oppressor/oppressed relationship and the foundation of all others (class, property etc.). Ironically, it is the last form of oppression to be fought against. * Religion serves to perpetuate the subordination of women by dulling them into submission and killing the will to change things * Judeo/Christian concept of 'God' the father serves to oppress women. It creates a general acceptance of the 'natural' superiority of men and this view is reflected through the course of historical Christian writing to contemporary policy. * The history of Christianity is therefore the history of Christian MISOGYNY (woman hating) * These pronouncements however are social constructions (created by men who had their particular biases and views of how society should be)because scripture tells us Jesus was the first feminist by including women in his preaching and teaching :). ...read more.