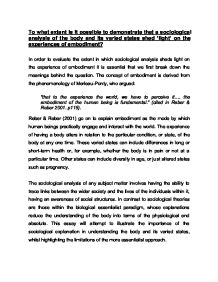 To what extent is it possible to demonstrate that a sociological analysis of the body and its varied states shed 'light' on the experiences of embodiment?

To what extent is it possible to demonstrate that a sociological analysis of the body and its varied states shed 'light' on the experiences of embodiment? In order to evaluate the extent in which sociological analysis sheds light on the experience of embodiment it is essential that we first break down the meanings behind the question. The concept of embodiment is derived from the phenomenology of Merleau-Ponty, who argued: "that to the experience the world, we have to perceive it.... the embodiment of the human being is fundamental." (cited in Reber & Reber 2001. p115). Reber & Reber (2001) go on to explain embodiment as the mode by which human beings practically engage and interact with the world. The experience of having a body alters in relation to the particular condition, or state, of the body at any one time. These varied states can include differences in long or short-term health or, for example, whether the body is in pain or not at a particular time. Other states can include diversity in age, or just altered states such as pregnancy. The sociological analysis of any subject matter involves having the ability to trace links between the wider society and the lives of the individuals within it, having an awareness of social structures. ...read more.

Self-identity has become more fluid and negotiable, separated from 'social structures', which are often claimed to be just a figment of the sociological imagination. For some theorists the discovery of the body, linked to these weakened structures, has led to the argument that we construct our bodies as we see fit. White (2002) emphasises the openness of the body, and of the individuals that shape it. More recent notions of the body have examined the cultural meanings placed upon it, desirable body size, weight and shape etc. There has been much sociological research into understanding the ideas behind the individual's concept of 'the self'. Much of this work is revolving around bodily appearance and individual self-perception, labels given to us by others and ourselves. Tyler (1998) investigated the recruitment and training of female flight attendants, concluding that their work: "involved adhering to culturally prescribed norms on femininity as well as organisational regulations governing her figure" Feminists' reactions to the way in which medicine 'medicalises' their bodies have raised crucial issues at the centre of sociological explanations of disease. Illnesses are not simply deviations from the body's normal functioning, being ill can have a number of meanings that extend beyond a simple biomedical one. ...read more.

Vance (1994) in her research into female sexuality, which can also be seen as a varied state, uses the example of female circumcision. She illustrates that social constructionists have not ignored the body, its function and physiology, and still in fact have the ability to incorporate the body with it's theory without returning to essentialism. From a sociological perspective, biology is by no means the overriding factor in the development of a disease. Rather, as White (2002) suggests, it is the prevailing social and economic conditions that allow a disease to develop which must be accounted for. Furthermore; "given that germs do not speak for themselves, it is our interpretation of events that leads some conditions to be categorised as diseases." (White 2002. p12) But to what extent has the sociological analysis of the body and its varied states shed 'light' on the experiences of embodiment? It is clear from the brief evidence summarised above and the reading available on the subject that the essentialist explanation of the body in incomplete. As with any aspect of human society the impact of the relationship between the individual and his/her surroundings must be taken into consideration. There is much work to be undertaken in this area of study and many more links, or dualisms, to be uncovered. ...read more.