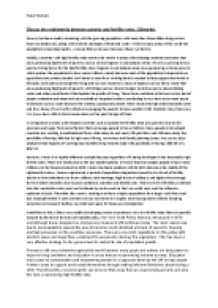 Discuss the relationship between poverty and fertility rates.

﻿Halar Shahani Discuss the relationship between poverty and fertility rates. (10marks) Poverty has been rapidly increasing with the growing population with more than three billion living on less than two dollars day, along with extreme shortages of food and water. Whilst in many areas of the world the population is booming rapidly. A casual link can be seen between these two factors. Initially, countries with high fertility rates seem to be mainly in areas of developing countries and areas that are experiencing high levels of poverty such as several regions in sub Saharan Africa. Poverty is proving to be a quiet a driving factor for the high fertility rates. Regions in sub-Saharan area are experiencing extreme poverty which pushes the population to have more children, mainly because most of the population is dependent on agriculture and primary basked work hence a need for a working hand is needed to help support the family in the daily work and earn enough for living and survival. ...read more.

In comparison to areas in developed countries such as Canada the fertility rates are quiet low due to less pressures and urges from social factors that encourage people to have children. Many people in developed countries are working in multinational firms while many do not marry till quiet late, and still many delay the possibility of having child due to high cost of living, work stress and family planning issues. In a survey 2010 produced that majority of working class families living Toronto reject the possibility of having child till very later on. However, France is a slightly different example because regardless of it being developed it has reasonably high fertility rates. These are mainly due to the pro-natalist policies in France that encourages people to have more children, set by the government in 1939. ...read more.

The main reason was due to overpopulation caused the area to become much stretched and lack of space for housing and high pressures on the countries resources. There are very strict regulations on this policy with abortion cases and large fines acclaimed for people who disobey the regulations. This has been a very effective strategy for the government to control its rate of population growth. Poverty is still very evident throughout the world however many goals and actions are being taken to improve living conditions and education in areas that are experiencing extreme poverty. Education and access to contraception and empowering women is a approach taken by the UN to help people in these areas to support and sustain themselves through making informed decisions about having a child. Therefore still a very strong link can be seen that areas that are experiencing poverty and also the ones experiencing high fertility rates. ...read more.