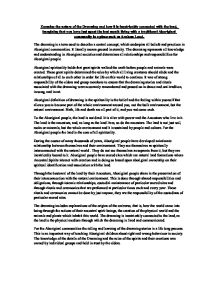 Examine the nature of the Dreaming and how it is inextricably connected with the land, imagining that you have just spent the last month living with a traditional Aboriginal community in a place such as Arnhem Land. The dreaming is a term used to describe a central concept, which underpins all beliefs and practices in Aboriginal communities. It literally means ground in eternity. The dreaming represents all knowledge and understanding in Aboriginal societies and determines all relationships and responsibilities for Aboriginal people. Aboriginal spirituality holds that great spirits walked the earth before people and animals were created. These great spirits determined the rules by which all living creatures should abide and the relationships of all to each other in order for life on this world to continue. It was of strong responsibility of the elders and group members to ensure that the dreaming stories and rituals associated with the dreaming were accurately remembered and passed on in dance and oral tradition, in song, and in art. ...read more.

Aboriginal people have sacred sites which are natural land formations where Ancestral Spirits interact with creation and in doing so based upon aboriginal ownership on their spiritual identification and association with the land. Through the bestowal of the land by their Ancestors, Aboriginal people share in the preservation of their interconnection with the natural environment. This is done through shared responsibilities and obligations, through totemic relationships, custodial maintenance of particular sacred sites and through rituals and ceremonies that are preformed at particular times each and every year. These rituals and ceremonies cannot be done by just anyone, they are the responsibility of the custodians of particular sacred sites. The dreaming includes explanations of the origins of the universe, that is, how the world came into being through the actions of their ancestral spirit beings, the creation of the physical world and the animals and plants which inhabit this world. The dreaming is inextricably connected to the land, as the land is the physical medium through which the dreaming is lived and communicated. ...read more.

The dreaming is inextricably connected to the land contains the Dreaming is the medium through which the dreaming is lived and communicated. The land is where the dreaming and its stories take place. These sites are regarded as being of sacred significance and carry with them ritual responsibilities for the Aboriginal community. Saying this the identity of an Aboriginal person can be said to be inextricably linked with the land. Because of this it is important to us to know that the land to the Aboriginal people is regarded to them as mother. The loss of land severs an Aboriginal from their dreaming and their core values and rituals. This is a major part to the Aboriginal communities all around Australia and i personally got to experience it for the last month that i spent in Arnhem land which really changed my view on the Aboriginal people and really showed me a side of them that i have never seen before. Thank you for tuning in tonight and i hope you can join us next week for more in the life of the Aboriginal people. ...read more.