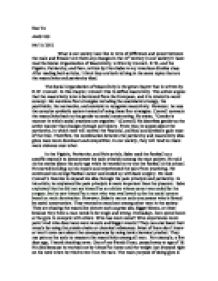 I have read the Social Organization of Masculinity, written by Connell, R.W, and the Pigskin, Patriarchy, and Pain, written by Don Sabo in my American Studies class. After reading both articles, I think they are both talking in the same topics that are th

Bao Vo AMS 100 04/11/2012 What is our society look like in term of difference and power between the male and female? Are there any changes in the 21st century in our society? I have read the Social Organization of Masculinity, written by Connell, R.W, and the Pigskin, Patriarchy, and Pain, written by Don Sabo in my American Studies class. After reading both articles, I think they are both talking in the same topics that are the masculinity and patriarchy ideal. The Social Organization of Masculinity is the great chapter that is written by R.W. Connell. In this chapter, Connell tries to define masculinity. The author argues that the masculinity term is borrowed from the European, and it is related to novel concept. He mentions four strategies including the essentialist strategy, the positivistic, the normative, and semiotic to recognize masculinity. However, he uses the complex symbolic system instead of using these four strategies. Connell connects the masculinity back to the gender as social constructing. He states, "Gender is manner in which social practices are organize." (Connell) He describes gender as the active manner that changes through out history. ...read more.

They wanted to stand out among other men in the society. They are chasing the masculine picture such as great abs, bigger biceps, or chest because they think a man needs to be tough and strong. Nowadays, men spend hours at the gym to compete with others. Who has more sweat? Who experiences more pain? And who does have more muscle and bigger muscle? They can also boost their muscle by using the protein shake or chemical substances. Most of them don't know or won't even care about the consequences by using toxic chemical product. They use pain as the scale to measure the masculinity among all men. For example, a few days ago, I heard shocking news. One of my friends Doan, passed away at age of 18. He died because he worked out by himself at home and the weight just dropped right on his neck when he tried to rest it on the rack. The main purpose of doing gym is getting healthy, but by the social construction, masculinity just forces men get into the twist where they have to become better than others to be a tough and strong man in the society. ...read more.

Men are more competitive than women. Men train themselves to be tough, strong, and aggressive to face to any extreme cases. Because of the patriarchy, men are responsible for the war, criminals, and violent cases among us. They have power over other gender in American society. The idea just passes from generation to generation continuously. To be a tough, strong, and smart guy, the young boys were taught and trained to be. I'm the best example for patriarchy ideal. This idea doesn't limit in one society but it is spread out around the world. I came from Vietnam where patriarchy idea is supported strongly. In my early age, my dad taught me that I need to be strong, and always think wisely. I can't just cry as my sisters do because a man will show his weakness through his tear. For the conclusion, as we live in our society, is there anything we can do to make our society more equal between male and female? By reading these two articles, I think Connell and Sabo describe the true and real life in the 21st century. However, as an individual, we can start treat your friend or wife, and female co-workers better to improve this power and difference issues in our society. ...read more.