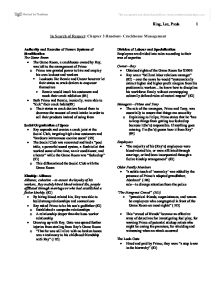 In Search of Respect Chapter 3 Handout

Authority and Exercise of Power: Systems of Stratification The Game Room * The Game Room, a crackhouse owned by Ray, was left to the management of Primo o Primo was granted power to hire and employ his own lookout and workers * Lookouts like Benzie and Caesar however let their status as crack dealers to empower themselves * Benzie would insult his customers and mock their crack-addiction (84) * Both Primo and Benzie, ironically, were able to "kick" their crack habits(89) o Their status as crack dealers forced them to decrease the amount of crack intake in order to sell their products instead of using them Social Organization of Space * Ray expands and creates a crack joint at the Social Club, targeting high class customers and "hardcore intravenous cocaine users" (99) * The Social Club was renovated and had a "pool table, a powerful sound system, a flush toilet that worked some of the time, an air conditioner, and a heater" while the Game Room was "fucked up" (93) o This differentiated the Social Club with the Game Room Kinship: Alliance Alliance, cohesion - to ensure the loyalty of his workers, Ray mainly hired blood-related kin, people affiliated through marriage or who had established a fictive kinship. ...read more.

* Their job was to protect the Game Room from excessive violence and aggression The role of Bourgois * A white face in the crack house-"deterrent to potential stickup artists, [...] stickup artists are simply not willing to take the risk of assaulting anyone who could possibly be confused as an undercover police officer" (108) Use of Production, such as Sustenance The desperate living conditions of Primo is immediately established at the beginning of this chapter, as Primo "had lost his job as a messenger-clerk at a typesetting shop and had abandoned all pretense of supporting their two-and-a-half-year-old son. * Primo's "own dependence on Ray for steady cash" (86) o Since the selling of crack was the only income of cash for these people, it is a source of sustenance, necessary for survival * Primo recognizes that "the only legal jobs he can compete for fail to provide him with a livable wage", and that he makes "more money here [crack-selling] than [Primo] could ever make working legit" (97,98) * so many crack-sellers are ultimately dependant on the crack economy o Bourgois confirms this dependence when he states that: * "none of the crack dealers were explicitly conscious of the linkages between their limited optiaons in the legal economy [...] and their dependence on the crack economy for economic survival" (98) ...read more.

Because when she fell I said "Oh, shit, are you all right there?" But her man, he was like...he jumped over her and walked out in front of her" * While dealers rely on the underground economy for sustenance, they see their practice as evil, and long to go back to the legal economy. * As a dealer rises in status, he becomes less dependent on drugs. Primo shook away his addiction after he became a dealer, but became more dependent on substance abuse when he was demoted. Processes of Change and Transformation: * There is a newly found desire by the many drug dealers to enter the legal economy o In chapter one, Ray tried to open a series of legal businesses. o Benzie- "the best way to be, is legal. Surive. Make your money and make everybody love you." (95). o Primo- "In private, Primo admitted that he wanted to go back to the legal economy. o The reason most of the dealers on the street turn to the illegal economy is because of the "intolerable working conditions at entry-level jobs" * Since the crackhouse runs on basic supply and demand, they must compete with the other dealers, who offer their product at a lower price, and at increased quality. To compete with these, Ray developed La Farmacia and The Game Room's amenities. ?? ?? ?? ?? 1 King, Lee, Preda ...read more.