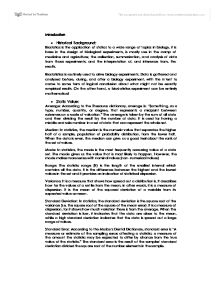 Introduction * Historical Background: Biostatics is the application of statics to a wide range of topics in biology, it is base in the design of biological experiments, is mostly use in the camp of medicine and agriculture; the collection, summarization, and analysis of data from those experiments; and the interpretation of, and inference from, the results. Biostatistics is routinely used to drive biology experiments. Data is gathered and analyzed before, during, and after a biology experiment, with the intent to come to some form of logical conclusion about what might not be exactly empirical results. On the other hand, a biostatistics experiment can be entirely mathematical * Static Value: Average: According to the Thesaurus dictionary, average is: "Something, as a type, number, quantity, or degree, that represents a midpoint between extremes on a scale of valuation." The average is taken by the sum of all data and then dividing the result by the number of data. It is used for having a middle and sole number in a set of data that can represent the whole set. Median: In statistics, the median is the numeric value that separates the higher half of a sample, population of probability distribution, from the lower half. ...read more.

In the second case, the one of the length of the leaves, the correlation is of -0.0118, they are not exactly the same, but they have a low level of compatibility, but the T value expose that it is a huge percent of probability that his values are causality. And is because actually, this two populations are two different species, so they are not comparable at all. * Is Biostatistics important for science The biostatics give the possibility to any camp of science, to make deeper and exact studies of population or phenomena, the biostatics give the chance to find similarities, and to make comparations of populations, is a necessary tool to analyze nature. The statistics part involves the accumulation, tracking, analysis, and application of data. Biostatistics is the use of statistics procedures and analysis in the study and practice of biology. As such, it has many real-world and scientific applications. * What was bad in the practice During the practice, maybe was committed a mistake of interpretation in the T value table, so the analysis is not 100% trustable . * Who it can be improved For the next time, the solution is jut in consulting and discus this type of question during class, beside the rest of the laboratory was take in a satisfactory way. ...read more.