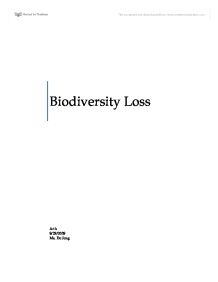 Biodiversity Loss Arth 9/28/2009 Ms. De Jong How will Biodiversity Loss affect our global environment? Biodiversity, the variation of life forms in the planet is the result of 3.5 billion years of evolution and consists of millions of different species. It is common in nature for species to become extinct but human activities have speed up this process and the world may be a facing the biggest mass extinction since the last ice age. The loss of biodiversity will have substantial impacts on human health. The demand for energy in the past 200 years, mainly fossil fuels, is one of the primary causes of biodiversity loss. In addition, agriculture is dependent on biodiversity but has been the greatest cause for biodiversity loss. We must learn to balance social, economic, political and environmental values in order to preserve and even reverse biodiversity loss. Biodiversity plays a huge impact on our daily lives even though many of us don't recognize it. ...read more.

Because of biodiversity loss, ecosystems have lost their capacity to remove wastes from the environment. If the problem continues, there will be global waste accumulation and this will lead increased pollutants in the air, water and soil which would have negative consequences on the health of the human population. Biodiversity can also be the cure for many of the world's health problems which range from herpes to cancer. 80% of new drugs are derived from natural products and the income from these developments can be substantial. Unfortunately, many of the species which might hold the key to solving the world's health problems are at the risk of being extinct. In recent years, politics and energy have gone hand to hand where governments are always trying to control the energy market by making new policies and restrictions. Most people realize the consequences of our energy usage, but the most governments are reluctant to take actions to prevent problems like global warming. ...read more.

Unfortunately these methods have a negative impact on biodiversity and can erode the soil. The extensification approach deals with increasing the amount of agricultural land which is mainly converted for growing cash crops. This has a serious negative effect on biodiversity because some of the most biodiversity habitats are being destroyed in this process. For example, a large fraction of the South American rainforests has been cut down for livestock and cash crops. In conclusion we must protect biodiversity if we wish to protect our planet. We must halt biodiversity loss if we still wish to stay healthy and keep our planet in the same manner. By reducing our energy dependence and switching to environmentally friendly methods, we can take a further step in reducing our environmental footprint. Finally we must learn new techniques to keep up food production the entire human population. In conclusion, if we can learn keep a balance between social, political and economical factors, we can halt and maybe even reverse the effects of biodiversity loss. ...read more.