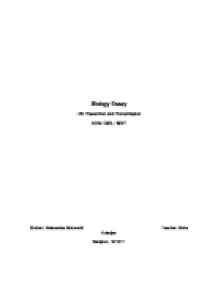 Biology Essay HIV Prevention and Transmission AOIs: C&S, H&SE Student: Aleksandar Bukurecki Teacher: Elvira Kukuljac Sarajevo, 19/10/11 Viruses are unique in that they have been classified as both living and nonliving, the reason for this is that they cannot reproduce without a host cell. Also they are acellular, which mean they don't have cells1. There are many different viruses, our body can fight most of the viruses but there are some that we cannot even fight with medics. HIV, Human Immunodeficiency Virus, is one of those. We still don't know how HIV evolved but there are a number of theories. One thing we know is that HIV probably evolved in Africa. The most commonly accepted theory is the "hunter theory"2. The SIV, Simian Immunodeficiency Virus, was transferred to humans as a result of chimps being killed and eaten, or their blood getting into cuts or wounds on a hunter. ...read more.

Uncontrolled blood transfusion, drugs and travel all helped HIV spread all over the world. Now let's see how HIV attacks our cells. The structure of HIV consists of three main parts, the genetic material, proteins and the envelope. The replication of HIV consists of a few steps. First is the fusion with the host cell, then HIV releases the viral proteins into the host cell and the reverse transcription starts, which mean the RNA from HIV is used to create the viral DNA, the reverse transcriptase enzyme does this. That viral DNA is then transported to the nucleus and is attached to the host DNA. Now the host cell crates new viral RNA which is used to make viral proteins. In the last step they all move together out of the cell and form a new HIV3. ...read more.

Also HIV is not the one that kills the person, but the inability to defend from diseases as a normal flu. AIDS has a great impact on our society, economy and many other things. We can clearly see that it effects our health and society, but I think that companies that sell condoms and medics that prolonging the life's of people infected by AIDS have an effect on scientists. The companies probably earn a lot of money and if we find the cure for AIDS the sale of condoms and those medics would dramatically fall. And today it is all about money, so AIDS have a huge effect on economy. One of the biggest problems today is finding the cure for AIDS, I think we are close to that moment, considering how developed our science is. This would be a great step for science and the whole world. But for now, protect yourself and others. ...read more.