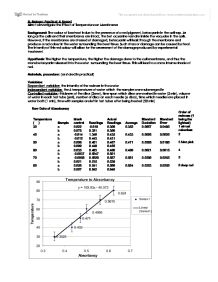 Effect of Temperature on Membranes

SL Biology: Practical 5: Report Aim: to investigate the Effect of Temperature on Membranes Background: The colour of beetroot is due to the presence of a red pigment, betacyanin in the cell sap. As long as the cells and their membranes are intact, the betacyanine remains inside the vacuoles in the cells. However, if the membranes are stressed of damaged, betacyanin will leak through the membrane and produce a red colour in the water surrounding the beet tissue. Such stress or damage can be caused by heat. The intensity of this red colour will allow for the assessment of the damage produced by experimental treatment. Hypothesis: The higher the temperature, the higher the damage done to the cell membrane, and thus the more betacyanin released into the water surrounding the beet tissue. This will lead to a more intense shade of red. Materials, procedure: [as stated in practical] Variables: Dependent variables: the intensity of the redness in the water Independent variables: the 6 temperatures of water which the samples were submerged in Controlled variables: thickness of the discs (3mm), time span which discs are washed in water (5 min), volume of water in each test ...read more.

* The standard error is very small across the 2 samples for each temperature. This shows that the data is probably very accurate since it does not vary much. * From the graph, it is seen that there is a steady, consistent and linear increase in the absorbancy with increasing temperature. * This is in line with the background information which states that the higher the temperature, the more damaged the cell membrane gets. More betacyanin is released from the cell vacuoles, leading to a more intense shade of red, therefore resulting in a higher absorbancy. Thus, this supports the hypothesis. Evaluation * The results seem to be generally reliable, since they correspond with the understanding of how cell membranes are damaged by heat. * However, experimental errors could have occurred. For example, due to parallax error, it is difficult to ensure that all the discs are cut to exactly 3mm in diameter. Percentage error can occur in the variations of thickness of discs, leading to inaccurate amounts of betacyanin being released. This would affect the results since we are only looking at temperature as a cause of the higher amount of betacyanin released. ...read more.

The first one to be put in will also be the first one to be taken out. This will ensure that all the samples have the same amount of time for the betacyanin to be released and therefore ensure a more accurate result. * Instead of using a blade to cut the beetroot, a hard boiled egg cutter should be used. This can hold the beet root in place and ensure that each disc is consistent in its width. It is also swift and clean in cutting, ensuring that minimal cells are damaged, and even when there is damage done, it ensures that the extent of damage is same to each disc since many are cut at once. Moreover, being able to cut many at once is more efficient and reduces lag time. * The experiment would be extended to temperatures beyond 80 to find out the temperature at which all the betacyanin has leaked out and the absorbancy no longer increases due to increasing intensity of red. Conclusion * The hypothesis is proven true that as the temperature increases, the cell membranes get increasingly damaged and thus release larger amounts of the red pigment betacyanine, causing an increased intensity in the red of the surrounding water, thereby leading to a higher absorbancy. ...read more.